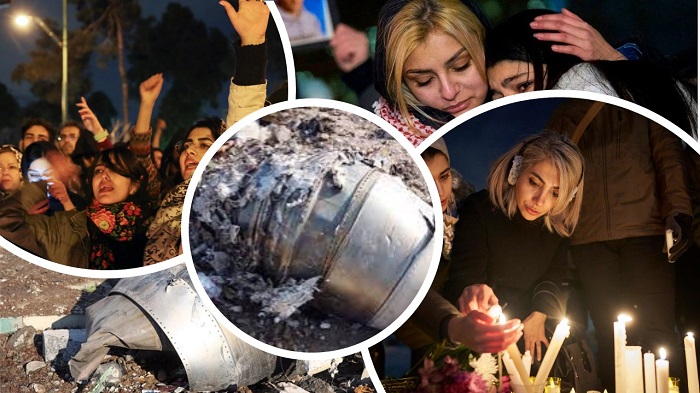 The families of the victims of the plane disaster attended a protest march in front of the Iranian regime’s criminal court for a civilian plane shot down by the Revolutionary Guards (IRGC) in January 2020.

The demonstrators, who have been openly demanding justice for their loved ones for two years, were unfazed by the massive presence of security officers.

The court has been called a ‘shameful show’ because only ten low-ranking policemen are being tried. Senior regime officials are the true culprits of this crime, as they are the ones who set the stage for this calamity to occur.

Protests erupted in various Iranian cities in the aftermath of the unlawful shooting down of a Ukrainian plane, with anti-government slogans chanted, including “Down with Khamenei, down with the Islamic Republic,” referring to regime supreme leader Ali Khamenei and the mullahs’ rule.

On the morning of January 10, 2020, two IRGC missiles shot down Ukraine International Airlines flight PS752, which was flying from Tehran to Kiev and Canada. The plane was shot down shortly after the government launched a missile attack on an American military installation in Iraq. The plane’s 176 passengers, including the crew, were killed in the crash. In the face of irrefutable evidence, the dictatorship originally claimed that the plane had crashed, but subsequently conceded that its military had shot down the plane.

Families of the victims of Flight PS752 carried signs with photos of their loved ones and statements like “A trial without expert opinion is against the law,” “the truth must not be sacrificed for interests,” and “justice cannot be exchanged for reparations” on Sunday.

The chief of the IRGC’s aerospace section, Amir Ali Hajizadeh, attempted to blame the pilot for the incident last week, expressing surprise that the plane “didn’t return to the airport” after being hit by the first missile.

“We immediately declared that we had done this,” Hajizadeh said during a conference of the Bassij, “but others didn’t approve.”

As the Iranian regime holds a formality court for a civilian airplane shot down by the Revolutionary Guards (IRGC) in January 2020, the families of the victims of the plane crash held a protest rally in front of the court in Tehran.#Iran #PS752https://t.co/i3kU2xAVVE

During this time, the regime’s top collaborated to conceal the occurrence, only admitting to the plane’s purposeful targeting under intense international criticism.

In March, former Tehran prosecutor Gholamabbas Torki announced the indictment of ten people in the case of Flight PS752. The officers involved are all low-ranking. The victims’ families believe Khamenei and senior regime officials are the true culprits of the atrocity.

The shooting down of PS752 was described as intentional and unlawful by a court in Ontario, Canada, in May. Ukraine announced in July that if its talks with Iran do not result in a resolution, it will take the case to the International Criminal Court.

Iran, January 11, 2020—Iran’s regime has been forced to acknowledge the fact that

the Ukraine International Airlines flight PS752 was targeted by its military units,

killing all 176 passengers and crew.