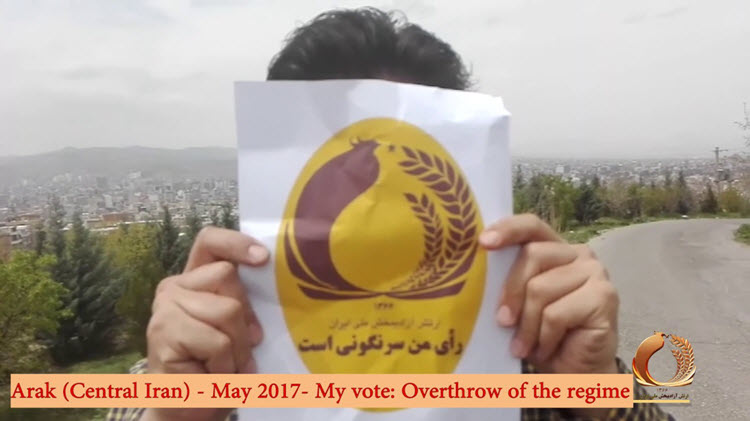 With the election in Iran only days away, officials are alarmed over the call for regime change, and the election boycott campaign that has gained strength with freedom-loving youths and supporters of the Iranian Resistance.

-“No to the executioner, no to the demagogue”

-“Our vote regime change. Our choice is Maryam Rajavi”,

are seen on the streets, and the popularity of a boycott of the poll has become widespread.

State media and officials have been forced to acknowledge these voices.

Supreme Leader Ali Khamenei said on May 10th, “The elections can be a sign of the country’s honor or they can be a sign of its weakness and create problems. Anyone who acts against [national] security in the course of the election will undoubtedly face a harsh slap. … The enemy seeks a change of approach by our [regime] … a change of approach is tantamount to the destruction of our Islamic [regime].”

Tasnim news agency reported on May 16th, that the head of the State Election Committee, Ali-Asghar Ahmadi, claimed on May 14th, “plots continue to be in the works”, and said that all of the regime’s military and security personnel will be active during the sham election. He added, “The police is in charge of implementing security. … They can make up for any deficiencies in their forces through the army, the IRGC, the Intelligence Ministry and the Bassij. We truly have full trust and faith in them.”

According to state-run Mizan news agency, on May 15th, Hassan Karami, head of the police special commandos, stated that his force had been doubled in size. He added, “The police Special Forces are prepared both physically and operationally to counter any possible action by the domestic and foreign enemies.”

State-run ISNA news agency, on May 12th, quoted Hossein Zolfaqari, head of security in the regime’s election committee as saying, “Security preparations, intelligence awareness and planning by the rapid response units has been planned such that any action that aims to disrupt security and order during the election would be dealt with firmly in the quickest possible timeframe, and we will decisively prevent any form of insecurity.”

On May 3rd, the Fars news agency wrote, “Recently the PMOI (MEK) have attempted to influence the nation’s election through their actions. … We should not be influenced by the enemy’s propaganda. The enemy seeks to shake the people’s hope in order to strike a blow to the system. … The intelligence agencies will firmly act against the [PMOI’s] movements.”

Tasnim wrote on May 8th, “Those who are stubbornly opposed to the people and to the system are spreading rumors in an attempt to influence the outcome of the election. … The issue of the executions of 1988 and the tales spread by the PMOI via Telegram and other social media are among these types of rumors.”

The head of the intelligence directorate of Hormozgan Province said on May 9th, “Identifying the agents, networks and goals of the PMOI is among the actions that this directorate has taken to counter the activities aimed at disrupting security in the province,” according to the State broadcasting corporation.

“A great sedition is in stock. Reports indicate that Maryam Rajavi’s photograph has been seen in various locations in Tehran. The image you are seeing is from under the Sattarkhan Bridge,” was written on May 14, by members of Khamenei’s faction.

A website affiliated to Khamenei’s faction wrote on May 16, “Photos put up of Maryam Rajavi in certain pathways and some of the slogans that have been written show that the PMOI is attempting to take away its share from the 2017 election. … The actions of the [PMOI] online has also reached its peak in recent days, and accounts affiliated to the [PMOI] have launched a campaign for boycotting the election and or inviting the people to take part in riots on the streets.”