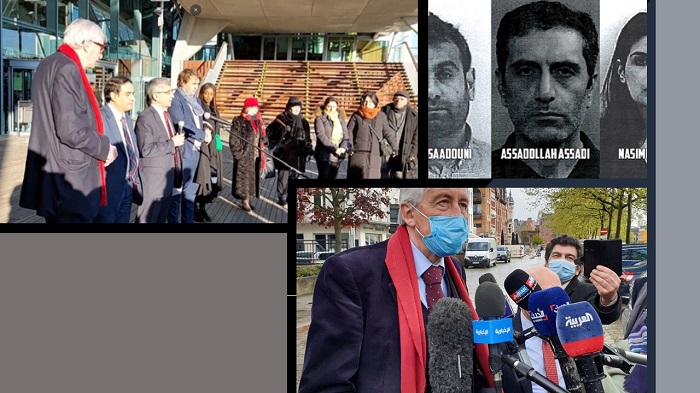 The final session of an appeals court in Antwerp, Belgium, for Iranian regime terrorists implicated in the thwarted 2018 bombing plot targeting an Iranian Resistance gathering staged just north of Paris was place on Friday, March 4. Following arguments from bomb experts, lawyers delivered their conclusions during this session. The final court decision is expected on April 20.

The Iranian regime’s diplomat-terrorist, Assadollah Assadi, has been condemned to 20 years in prison for his direct involvement in the conspiracy and for transporting explosives from Tehran to Europe in a diplomatic pouch on a passenger flight. He declined an option to file an appeal, instead accepting the initial punishment to save the mullahs’ dictatorship from more embarrassment.

The MOIS sent Arefani to Europe when he began working with the Iranian authorities in prison after being detained in the 1980s. By identifying himself as an atheist poet, he attempted to normalize his presence in Europe. Authorities discovered a substantial number of surveillance equipment and devices meant to collect information about the Iranian opposition People’s Mojahedin of Iran (PMOI/MEK), as well as its members and supporters across Europe, particularly in Germany when they searched his residence.

Mrs. Maryam Rajavi, the President-elect of the Iranian opposition coalition National Council of Resistance of Iran (NCRI) and the keynote speaker at the 2018 protest, had been asked by the MOIS to place the bomb as close to her as possible.

Several notebooks were taken from Assadi’s vehicle by German officials. The names and addresses of 289 distinct individuals working with the MOIS against the MEK are contained in a single notebook, which was created specifically to collect information for the MOIS’ demonization campaign and terrorism plots.

The MEK has long made various revelations suggesting that those involved in the demonization efforts against the opposition in Germany are not doing it for free, and their names can be discovered in several MOIS notes.

The MEK is the primary target of demonization, terrorism, and espionage efforts carried out by Iranian regime agents, according to German intelligence services’ annual reports.