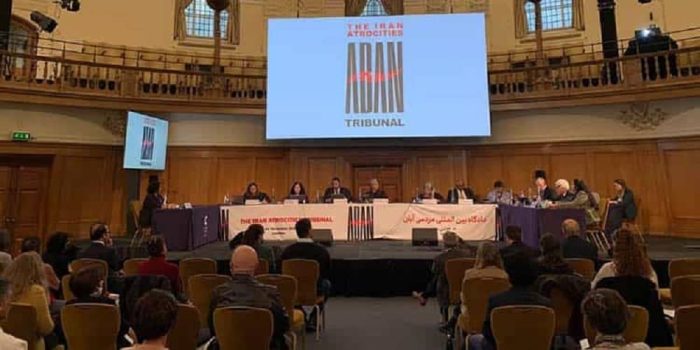 On Sunday, November 14, an international people’s tribunal in London completed its fifth and last day of hearings. Human rights organizations in London, Paris, and Oslo convened the Iran Atrocities Aban Tribunal to probe the Iranian regime’s crimes in November 2019, when it unleashed a savage crackdown on widespread rallies, killing 1,500 people.

During the tribunal, a lot of witnesses came forward to testify about what happened during one of Iran’s heinous human rights violations. Protesters, detainees, and relatives of the victims were present for the entire five-day trial, which exposed terrible details of the regime’s security forces’ atrocities against the Iranian people.
Protests began in November 2019 in response to a sharp increase in gasoline prices, before developing into a state-wide uprising across Iran, with protestors expressing their dissatisfaction with the regime and advocating for its ouster. The horrific massacre of demonstrators during that time has since been declared a crime against humanity by international law experts.

On the last day of the hearing, a former employee of the Islamic Revolutionary Guard Corps (IRGC) Khatam-ol Anbiya Garrison, known only as Witness 367, testified about the IRGC’s role in the crackdown on dissent.
Due to a lack of forces, the IRGC used its personnel to assist in the suppression of civilians. The IRGC garrison’s personnel demolished and damaged people’s stores and vehicles while claiming that the damage was caused by the people.
Witness 18, a lady who requested anonymity, stated that her son was one of the victims mercilessly murdered down during the riots, but that his death certificate listed his cause of death as ‘being hit by an accelerating item.’ Authorities refused to hand over his remains to his family when he died until they were summoned to the cemetery and told to bury him there a week later.

Witness 119 recalled watching government officials shoot fire on residents of a nearby community, killing a 16-year-old girl and wounded numerous others. They reported how, following the shooting, the streets around town were soaked in blood, which was eventually wiped away by municipal employees.

I extend my appreciations to The Iran Atrocities #AbanTribunal, a popular and international mechanism, playing a noteworthy and effective role in detailed documentation of the crimes against humanity committed in November 2019 in #Iran.

Witness 2016, a lady, described how upsetting it was to see security agents shooting a pregnant woman during a gathering. She described how her friend’s kid tried valiantly to save the woman but was shot at as well. He was then detained and denied medical attention. Wounded victims who made it to medical clinics were detained as well.

Witness 245, who asked to remain anonymous, stated the wounded were taken to the police station rather than a hospital by ambulances.
A group of young guys fashioned a shield out of a 12-meter object and flung stones from behind it was another terrible account heard during the hearing. Security personnel replied by opening fire and pouring bullets on them, hurting a few of them seriously.