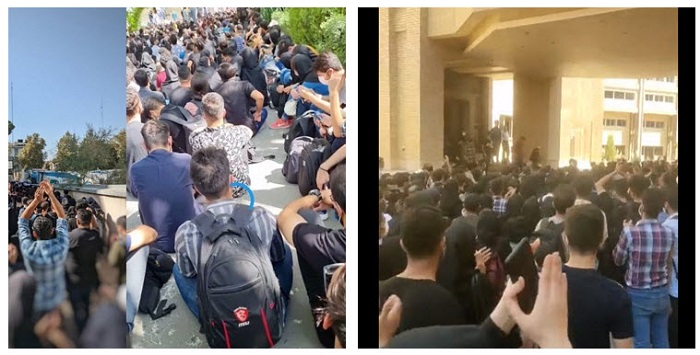 Protests against Iran’s regime entered their fourth week on Saturday. They are now being carried out nationwide in the form of civil disobedience, according to observers. These protests erupted across Iran following the death of Mahsa Amini at the hands of the brutal regime’s morality police, reigniting the people’s desire to destabilize the regime.

Protests have now spread to 177 cities and all 31 provinces across Iran. According to People’s Mojahedin of Iran (PMOI/MEK) reports, the regime has killed 400 civilians and arrested 20,000 others so far.

According to social media videos, the demonstrators chanted anti-regime slogans like “Death to Khamenei!” primarily aimed at the regime’s supreme leader, Ali Khamenei. It was also reported that clashes erupted in front of the prestigious Sharif University.

Youths, college students, and high school students clashed with the oppressive security forces of the regime on Monday in Tehran and other cities including Sanandaj, Saqqez, Karaj, Mashhad, Marivan, Mahabad, Salas Babajani, Fardis in the Alborz Province, Shahr-e Rey, Qazvin, Kermanshah, Arak, Bandar Abbas, and others. Store owners went on strike and shut their doors in support of the widespread demonstrations.

Early on Monday morning local time, contract workers at the Bushehr Petrochemical facility in Asaluyeh, Bushehr Province, southern Iran, went on strike. They joined the general uprising on the 25th day and started yelling anti-regime cries like “Death to Khamenei!” and “We will fight and take back Iran!”

The clashes caused new traffic jams on some of Tehran’s main thoroughfares. Motorists are said to have supported the demonstrators with horn concerts and anti-regime slogans. One of them was allegedly shot in the head during a protest in the western Iranian city of Sanandaj while honking his car horn in solidarity with the protesters.

Today marks the 25th day of the nationwide uprising against the regime.#IranRevolution2022#مهسا_امینی #نیکا_شاکرمیpic.twitter.com/4s2woI53wF

Furthermore, inmates at the notorious Lakan Prison have reportedly started a riot. They have kidnapped several officials. As a result, authorities used lethal force against inmates, killing at least four. Authorities have also imposed death sentences on inmates, including women and juvenile offenders.

On the same day, the regime’s president, Ebrahim Raisi, spoke at Al-Zahra University in Tehran about foreign conspiracy operations against the regime. However, students greeted him with slogans such as ‘we don’t want a corrupt guest’ and ‘get lost.’

Live ammunition, shotgun pellets, and other metal bullets are being used by security forces against demonstrators, as well as mass beatings and sexual violence against women. In addition to these reports, the deaths of dozens of women, men, and children have been documented, and the death toll is expected to be very high, with many more injured.

The videos from the protests that have been posted on social media are making it difficult for police and security forces to quell the protests; this strategy has helped the people to expand their resistance, and the people now speak of a revolution, which they are fighting tooth and nail to realize.