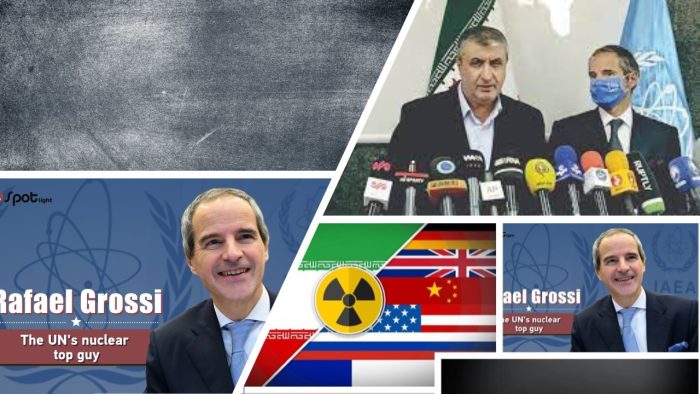 Rafael Grossi, the head of the United Nations nuclear inspector and General Director of the International Atomic Energy Agency (IAEA), finished his visit to Iran without securing a settlement with Tehran over its clandestine nuclear program or making a press conference.

Grossi visited Iran in an effort to settle some of the difficulties raised in his report and lay the stage for constructive cooperation among the nuclear deal’s parties.

Last week, the IAEA released updates on ongoing disputes with Iran’s authorities, as the latter prepared for the start of talks in Vienna aimed at salvaging the 2015 nuclear deal. Following nearly six months since the previous session, Britain, France, Germany, Russia, and China will participate in those discussions on November 29. Due to the Iranian regime’s refusal to authorize direct discussions with the US, the US will participate in the dialogue indirectly.

Tehran’s recent statement and Grossi’s failed visit to Iran are two examples of the regime’s obstruction and non-cooperation, which includes a commitment to demands that the US lift all economic sanctions before the regime will even consider reversing the steps it has taken to advance its nuclear program since the Joint Comprehensive Plan of Action or JCPOA was put on life support in 2019. Every time this one-sided idea has been offered to the US; it has been rejected.

Grossi publicly declared during the IAEA’s quarterly report in the summer that it was no longer possible to simply restore the original parameters of the JCPOA due to the Iranian regime’s collection of nuclear material, know-how, and capabilities. When asked in October if it would be a good idea for the IAEA’s Board of Governors to formally censure Iran, he responded affirmatively. On November 2, he publicly lamented an “astounding” lack of communication between IAEA officials and Ebrahim Raisi’s government.

Grossi reached an agreement in February to keep nuclear inspectors in the nation but agreed that they would no longer have direct access to surveillance cameras and data monitoring devices. A later agreement stipulated that the IAEA would be granted access to the relevant facilities for a period of time sufficient to complete equipment maintenance and hard drive replacement. However, a camera at TESA Karaj had been destroyed and taken offline at that time, and the regime had also disconnected three others at the same location.

Since then, the facility in question has become a monitoring blind hole for the IAEA, and given the length of time for which no surveillance film exists, it will never be entirely repaired. Grossi undoubtedly meant to devote much of his time and effort to resolve this issue during his recent journey to Tehran, but his subsequent words raise serious doubts about his chances. Now, whether he can persuade the international community, including Russia and China, that Iran is mostly to blame for ongoing conflicts, might determine the outcome of the following discussions in Vienna.

Tehran’s provocative acts are not coming from a position of strength, as Western countries should be aware. The regime is dealing with a restive people, an insolvent economy, and sanctions that have severely harmed the regime’s capacity to fund terrorist proxy groups and fuel its warmongering machine.

The international community should re-establish the Six United Nations Security Council Resolutions constraining the regime’s nuclear program to put an end to the regime’s nuclear provocations. Dealing with Tehran would simply embolden the government to pursue its nuclear program and other harmful operations, as has been demonstrated in recent months. By placing sanctions on the government, Western nations should put an end to Tehran’s plan to complete a nuclear weapon once and for all.