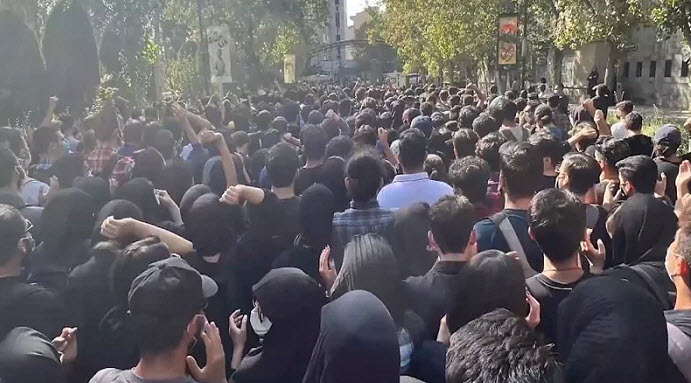 It has been roughly three weeks since the Iranian regime’s judiciary issued its first death sentence in connection with the nationwide uprising that erupted following the death of 22-year-old Mahsa Amini at the hands of Tehran’s infamous “morality police.”

This publicity could pose another major challenge to the Iranian regime, given that memorials to victims of the government crackdown have fuelled some of the largest demonstrations in recent weeks.

According to the latest estimates from the People’s Mojahedin of Iran (PMOI/MEK), the country’s leading pro-democracy opposition group, protests are now taking place in as many as 277 cities and towns, with their central demands including not only the restoration of women’s rights but also the removal of the entire regime responsible for forced veiling laws and gender apartheid.

The #MEK has fought the regime's misogyny ever since it came to power in Iran.
In March 1979, women of the #MEK were beaten by the regime's suppressive forces for defending the rights of women who didn't wear hijab.#WomenForce4Change#OrangeTheWorldhttps://t.co/XliYsvSGz9 pic.twitter.com/VQKcI38XRz

According to the PMOI, over 660 protesters have been killed since the uprising began, with 60 of them being under the age of 18. One factor contributing to the high death toll is the difficulty protesters have had in receiving medical treatment. Iranian prisons and detention facilities are notorious for denying such treatment, often as a punitive measure, and authorities have been staking out hospitals, medical centers, and even pharmacies in an effort to identify and arrest anyone seeking treatment for injuries sustained during protests.

As a result of this situation, a number of Iranian doctors, particularly those affiliated with the PMOI, have established networks dedicated to making house calls and providing treatment to activists outside of hospital settings. However, these networks have become targets of the regime’s surveillance operation, and as a result, some medical professionals have been arrested.

25years ago,I emphasized women will overthrow the mullahs
We say no to compulsory hijab, no to compulsory religion & no to compulsory rule!
The uprising seeks a free & democratic Iran
People chant:"With or without Hijab,march toward revolution"#OrangeTheWorld#WomenForce4Change pic.twitter.com/bWnRgb81om

On October 13, a doctor named Ibrahim Rigi was arrested and accused of “leading” anti-government protests in and around the city of Zahedan. Separately, Hamid and Farzaneh Qarahasanlo, husband and wife doctors, were detained while attending the funeral of a protester killed in Karaj. All three people are now facing charges of spreading corruption on Earth or enmity against God, and Hamid is said to be in critical condition as a result of savage beatings during his detention.

According to the Iran Human Rights Monitor, at least 539 people have been hanged since the beginning of 2022.

After an abrupt transfer from Isfahan, a detainee named Keyhan Shakerpanahi was hanged in Kashan Central Prison on Saturday, and no sources could determine the reason for his execution. Furthermore, three people were executed on the same day inside Isfahan Central Prison, but only two of them could be identified by name.

The Iranian regime’s destructive policies have made the brain drain phenomenon a daily routine. Doctors, nurses, engineers, and other elites are fleeing #Iran and seeking better lives in other countries.
Read more herehttps://t.co/ODe9iuszV4pic.twitter.com/cCLE5suTRN

Furthermore, recent developments indicate that the execution rate may experience another sharp increase during the month of December. However, much of the international community appears to have recognized these trends, and last week, the UN Human Rights Council directed the formation of a “fact-finding mission” to investigate the still-escalating crackdown on protests across Iran.

Following the United Nations’ 69th condemnation of Iran’s regime, the Iranian opposition President-elect Maryam Rajavi of the National Council of Resistance of Iran (NCRI) stated, “The time has come to refer the dossier on the regime’s crimes dossier to the United Nations Security Council and bring its leaders to justice.”