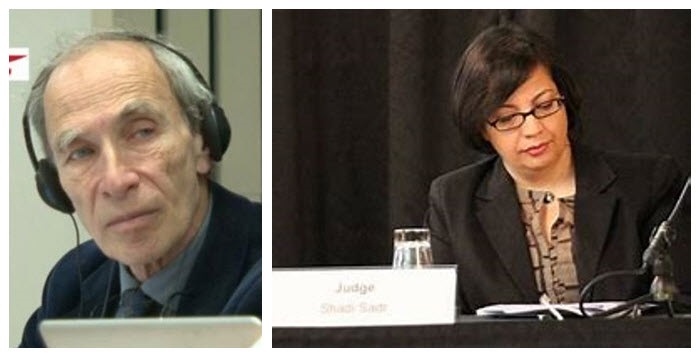 Professor Eric David, a renowned international human rights law expert and president emeritus of the Centre for International Law at the Free University of Brussels, provided his expertise on this topic during the trial of Hamid Noury, an Iranian regime operative for his role in the summer 1988 massacre of over 30,000 political prisoners, continued in Stockholm on Thursday, March 24. Another international law expert and one of the founders of the Justice for Iran movement, Shadi Sadr, testified on Wednesday.

Members and supporters of the Iranian opposition People’s Mojahedin of Iran (PMOI/MEK) made up the majority of the over 30,000 political detainees killed in jails around the country during the 1988 massacre. Noury was implicated in hundreds, if not thousands, of deaths in Karaj’s Gohardasht jail, which is located west of Tehran, Iran’s capital.

Professor David stated that the battle between the MEK and the mullahs’ regime is a non-international conflict and that such a conflict must be transparent, which means that the parties involved must have clearly declared war, and the officials participating must be known and identified.

Professor David went on to say that crimes committed in non-international conflicts, which are akin to international wars, are deemed war crimes under international law and the Geneva Conventions. These laws were all enacted prior to the slaughter in Iran in 1988, he noted, underlining that even if such laws did not exist in 1988, the absence of such legislation does not prohibit culprits from being prosecuted.

During World War II, many countries’ laws, including Norway and Finland’s, contained no mention of war crimes, even in international conflicts. Many WWII perpetrators, on the other hand, were prosecuted and punished in these countries under war crimes statutes. Furthermore, this expert decided that the 1988 massacre was a war crime, a crime against humanity, and a genocide.

On March 23, the court heard from Shadi Sadr, an expert who has been investigating the torture and abuse against political detainees with her colleagues since 2010. Her research focuses on female political prisoners held by the Iranian dictatorship throughout the 1980s. Sadr noted that their investigation includes the massacre of political detainees in more than 20 Iranian jails in 1988.

The bodies of slain prisoners were not returned to their relatives, and most families of political prisoners executed in Tehran’s notorious Evin or Gohardasht prisons in 1988 believed their loved ones were buried in mass graves in Khavaran, southeast of Tehran, Sadr stated.

Sadr stated that the Justice for Iran organization has undertaken investigations into the mass graves of victims of the 1988 massacre in many Iranian cities, underlining that the Islamists’ dictatorship has attempted to obliterate these sites.