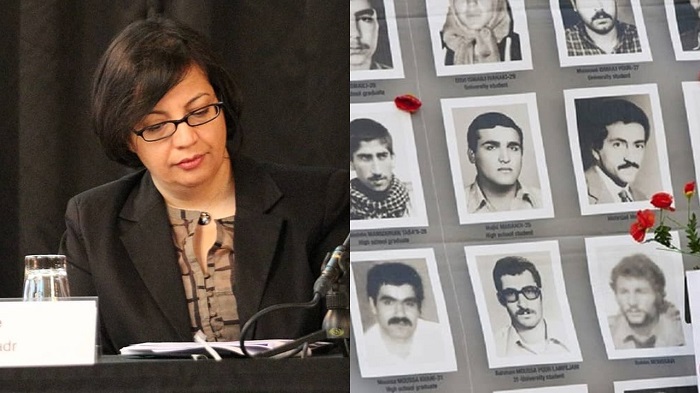 The trial of Hamid Noury in Sweden entered its seventy-seventh session on Wednesday, March 23. Noury, an Iranian prison officer, was detained in Sweden in 2019 as a result of his involvement in the 1988 massacre of over 30,000 political detainees, predominantly members and supporters of the People’s Mojahedin of Iran (PMOI/MEK).

Ms. Shadi Sadr, an international law specialist and one of the founders of the Justice for Iran Organization (JFI), testified at the hearing on Wednesday.

JFI “aims to hold perpetrators of significant human rights violations, including but not limited to crimes against humanity, torture, enforced disappearances, a war crime, and genocide, perpetrated in Iran or by Iranian officials, accountable,” according to its website.

Ms. Sadr, as one of the JFI’s founders, has also performed research on the 1988 genocide, Iran’s persistent human rights violations, and the condition of Iranian women under the misogynous theocracy that rules the country.

Ms. Sadr and her colleagues at JFI have been conducting extensive research on the Iranian regime’s systemic abuse of political detainees since 2010.

Ms. Sadr stated in part of her evidence that she and JFI began looking into the situation of the families of the victims of the 1988 massacre. She stressed that, based on their findings, the Iranian dictatorship has refused to return the corpses of the victims to their families. As a result, many families fear their loved ones are buried in mass graves like the one in Khavaran, Iran.

Ms. Sadr also gave insight on Tehran’s efforts to obliterate all mass graves and other evidence related to the 1988 massacre in a methodical manner.

It’s worth noting that Hamid Noury’s trial was moved to Albania in August 2021, at the request of the prosecutors, so that the judge, prosecutors, and lawyers could hear the important testimony of seven MEK members who survived the 1988 genocide and are plaintiffs in Noury’s case. Noury, on the other hand, was forced to remain in Sweden, where he is being held for war crimes.

The MEK and its progressive interpretation of Islam were seen by the Iranian regime’s then-supreme leader, Ruhollah Khomeini, as a serious challenge to his rule and ideology in 1988. As a result, he made the decision to execute anyone who refused to surrender.  The entire system would prefer that those tens of thousands of young people surrender to the dictatorship and return home with the message that opposing Khomeini is pointless. Instead, these brave men and women opted to die for a cause that would inspire love, equality, and prosperity for future generations. The current uprisings in Iran demonstrate that the message and spirit of those who were executed in 1988 live on and that their deaths were not in vain.

Indeed, Khomeini’s designated, and later sacked, heir, the late Ayatollah Hossein Ali Montazeri, told members of the Death Commission on August 14, 1988, “The People’s Mojahedin are not individuals; they are an ideology, and a world outlook. They have logic. It takes the right logic to answer the wrong logic. You cannot rectify wrong with killings; you only spread it.”

Raisi “deserves to be crowned as the sultan of money-printing,” says Former Regime Central Bank Chief