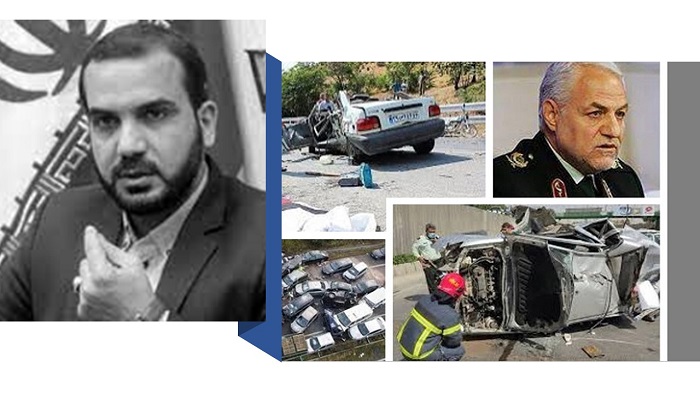 Thousands of Iranians are killed in car accidents every year, according to international monitoring organizations. Due to a substantial increase in fatalities, Iran’s perilous roadways have been dubbed “death halls” by domestic media.

According to the country’s newest statistics, the number of people killed in car accidents grew by 9.6% in the last year, reaching 17,000 people. The government predicted that this figure would drop to 15,000 in a year, yet it has done nothing to preserve people’s souls, as it has in many other areas.

The number of car accidents and fatalities has increased in Iran

According to the Young Journalists Club (YJC), which is linked with the Islamic Revolutionary Guard Corps (IRGC), the number of car accidents increased by 31% in the previous year as of December 12, 2021.

Due to the pandemic, the number of car accidents and fatalities has increased in Iran, whereas urban and intercity traffic has decreased significantly. As a result, non-standard and unsafe roads and streets, as well as inappropriate indigenous automobiles, are the leading causes of automotive accidents.

Instead, the Iranian government tries to persuade the public that the “human factor” is to blame for the high number of car accident victims. In effect, officials are attempting to deflect blame from themselves and place it on victims.

Former Traffic Chief Seyyed Hadi Hashemi, on the other hand, has confessed that the figures on car accident fatalities are inaccurate and are skewed by statistical manipulation. “Despite the manipulation of statistics, the death toll from car accidents remains high,” he said in an interview with Jameh 24, on December 28, 2021.

“These are deceitful tactics, and there is no safety in the field of cars.”

“We don’t count death after 30 days of incidents like tossing the vehicle into the river or exiting from the road and its 2.5-meter side-lines among car accident victims in various circumstances,” Hashemi explained. “In reality, we are misleading and obliterating the problem completely.”

Hashemi mentioned the deplorable state of the roads and the current socio-economic catastrophe in his interview. “Don’t be deceived by people who say, ‘Our automobiles have all the necessary safety features,'” he continued. “These are deceitful tactics, and there is no safety in the field of cars.” The vehicle mafia is so powerful that no one in the country can handle it.”

Hashemi alluded to Iran’s most prominent figure, Supreme Leader Ali Khamenei, and his secret office, which is worth billions of dollars, as well as the IRGC, as those who control the country’s economy.

Furthermore, the newspaper Jahan-e Sanat issued a warning on December 20, 2021, about the “seven-headed serpent of corruption” in the car industry. Khamenei’s envoy in Bandar Anzali, Gilan’s northern province, Seyyed Abdoljavad Shamsuddin, criticized the government. “Why are automakers losing money?” he inquired.

“Iran is one of the most accident-prone countries in the world,”

“Compare and contrast indigenous automakers with other enterprises around the world!” You have closed the country’s doors to automobile importation; you do not allow automobiles to enter the country, so preventing competition. You also overlook the [indigenous] car’s improving efficiency and quality. Take a look at the global automakers; how many people do they employ? What is the total number of products they have? “How much do their goods cost?” He went on to say more.

Nonetheless, Mojtaba Youssefi, a member of the Parliament’s [Majlis] Presidium, acknowledged the role of unsafe roads and low-quality cars in Iran’s high number of car accident fatalities. “Iran is one of the most accident-prone countries in the world,” he said on December 26, 2021, according to the Majlis’ official website ICANA. “In addition to high mortality, we observe disability caused by accidents.”

“On average, 17,000 people are losing their lives to road accidents in the country every year.” “This means that 20 individuals out of every 100,000 dies in car accidents every year,” he continued. “Indigenous automobiles are of poor quality, as we have repeatedly stated. However, the country’s two automakers have failed to take steps to improve their vehicles.”