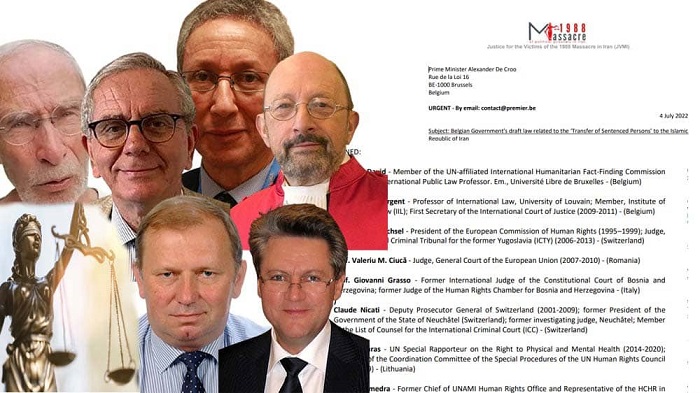 Only about 24 hours after it was revealed that the Belgian government had been secretly negotiating a deal with the Iranian regime to release Assadollah Assadi, a convicted and imprisoned terrorist, and three of his accomplices. Iranians and political figures from all over the world have expressed outrage.

In 2018, hundreds of lawmakers, current and former officials, and dignitaries from five continents were among the 100,000-person National Council of Resistance of Iran gathering that Assadi and his allies attempted to bomb in France.

Members of Justice for the Victims of the 1988 Massacre in Iran (JVMI) wrote to Belgium’s Prime Minister Alexander De Croo, requesting the termination of the deal.

“We are deeply concerned by a treaty on the ‘Transfer of Sentenced Persons’ signed secretly between Belgium and the Islamic Republic of Iran in March 2022, which would allow convicted Iranian diplomat Assadollah Assadi to be transferred back to Iran where he would certainly be set free,” JVMI wrote.

An Antwerp court sentenced Assadi to 20 years in prison, while his accomplices Nasimeh Naami, Amir Saadouni, and Mehrdad Arefani received sentences of 18, 18, and 17 years in prison, respectively, as well as the revocation of their Belgian citizenship and passports.

“Assadi was convicted by the Belgian Judiciary for masterminding the attempted bombing of an international ‘Free Iran’ convention in France in 2018. Police records show that Assadi personally transferred a powerful bomb in his diplomatic bag on a commercial flight from Iran to Austria and later handed the bomb to two terrorists to use at a convention attended by tens of thousands of people including hundreds of distinguished international personalities.

“Allowing Assadi to serve the remainder of his 20-year sentence in Iran, the state which was responsible for the attempted terrorist bombing, would make a mockery of the rule of law and foster further impunity for the Iranian government and its officials involved in terrorism and crimes against humanity… Most worryingly, Article 13 of the treaty signed with Iran states: Each Party may grant pardon, amnesty, or commutation of the sentence in accordance with its Constitution or other laws.

“That article would effectively allow the Iranian government to grant a pardon to Assadi the moment he arrives in Iran.”

“We strongly urge the government of Belgium to withdraw its request from the parliament and to terminate this unethical and scandalous treaty with the Iranian theocracy, and we equally urge the Parliament of Belgium to declare this treaty to be defeating the European efforts to fight terrorism and turn down its approval,” JVMI concluded.

This abhorrent agreement, which will only give the regime more room to step up its terrorist activities in Europe and expand its practice of holding dual national hostages and using them as leverage, has been vehemently condemned by the Iranian Resistance and Iranian expatriates.