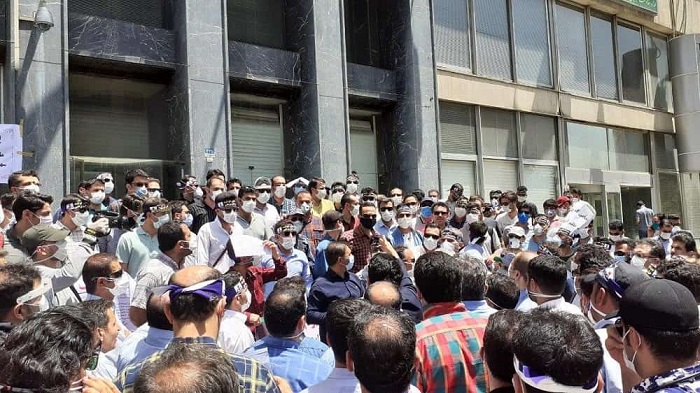 May first marked International Workers’ Day. People yearned for better working conditions, and protests were held all over the world. In Iran, however, Labor Day was different. Iran’s protests received less media attention. This is not because Iranians enjoy their working conditions, which are described as “modern slavery” by many state-run media outlets.

Low wages, harsh working conditions, and job insecurity do not begin to describe the situation of Iranian workers. The country’s economic collapse, a high unemployment rate of around 11%, and the regime’s systematic oppression of the workers’ syndicate leave no room for protests, according to state-run media.

To put it another way, Iranian workers work hard to make a meager living, and when they demand a decent working environment, they lose their jobs and are replaced by others. Nonetheless, the state-controlled media frequently reports layoffs and strikes by workers who have not been paid in months.

Iran has the world’s fourth-largest crude oil reserves, but its citizens struggle to make ends meet. Workers’ demands have been ignored by the regime authorities. Workers’ tables are shrinking as the cost of basic foods rises.

“In April 2021, Faramarz Towfiqi, the head of the Supreme Council of Islamic Labor Councils’ wage committee, conducted a survey based on data from the International Monetary Fund, compiling a list of workers’ wages in various countries.” On February 21, 2022, the state-run Asr Iran reported, “This study shows that Iranian workers with a minimum monthly wage of $75 rank 160 and are considered cheap labour force.”

The supreme leader of the Iranian regime has called for the “privatization of Iran’s economy” since 2006. Fearing that their involvement in terrorism would jeopardize their secret financial system, the Revolutionary Guards and Khamenei launched a privatization plan in 2006, gradually handing over the country’s economy to so-called “private” front companies.

As a result, so-called “private” companies and contractors enslave Iranian workers, and when they protest harsh working conditions, they are oppressed and fired, while the regime denies responsibility.

On May 26, 2021, Nasrullah Daryabeigi, Executive Secretary of Mazandaran Workers’ House, told the semi-official ILNA News Agency that privatization in Iran has resulted in poverty, slavery, worker dismissal, social anomalies, and the specialization of social justice.

The working conditions of Iranians have steadily deteriorated over the last four decades, as the regime has squandered national wealth on terrorism and its secret nuclear weapons program, and regime officials have plundered the country’s remaining resources.

“Economists predict that Iran’s absolute poverty line will rise to 120 million rials. The director-general of the Parliamentary Research Center’s Economic Studies Office stated, “Our country’s poverty rate has reached around 35 percent.” In other words, 35% of the population lives in poverty, according to the state-run Etemad online in January 2022.

Ebrahim Raisi’s government has only increased workers’ wages by 10%, bringing them to less than 50 million rials, after boasting about helping them for a month. Despite the escalating tensions in Ukraine, the world celebrated International Workers’ Day. The occupation of Ukraine has sent shockwaves throughout the global economy.

Ukraine is the world’s leading producer of sunflower oil, accounting for more than half of all global exports. Along with Russia, the country is responsible for over a third (36%) of global wheat exports. The conflict in Ukraine has had an impact on food supplies in importing countries like Iran. In order to be able to sell its oil at a higher price, Tehran welcomed the war in Ukraine in order to gain Moscow’s support in the ongoing but fruitless nuclear talks with world powers.

Aside from the war’s consequences, since Raisi abolished the preferential currency rate, which allowed for cheaper grain imports, the prices of bread and pasta have skyrocketed, making these items scarce.  There have been protests and numerous warnings from regime officials that another uprising would erupt soon because bread is the workers’ primary food source.