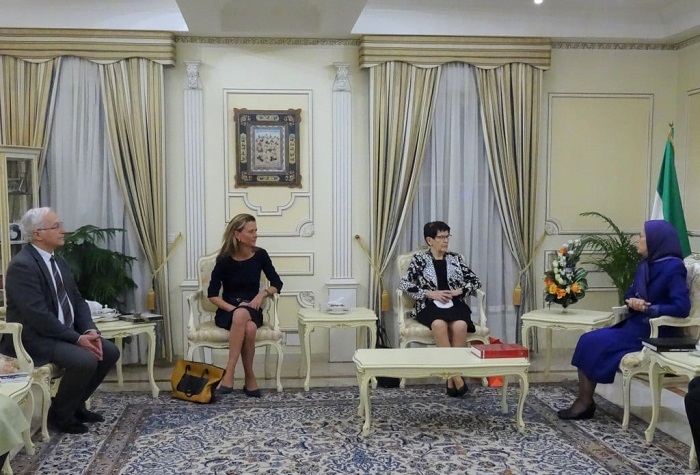 Mrs. Maryam Rajavi, the President-elect of the National Council of Resistance of Iran (NCRI), was visited by a group of German lawmakers on January 18 at her home in Auvers-Sur-Oise, northwest of Paris.

Before they migrated to Albania in 2012 from Iraq, German politicians and personalities were involved in the effort to safeguard members of the People’s Mojahedin of Iran (PMOI / MEK Iran). Prof. Süssmuth has made multiple trips to Ashraf-3, Albania since the relocation to meet MEK members.

Prof. Dr. Süssmuth praised the Iranian Resistance and its ongoing struggle against repression and escalating executions in Iran during his most recent meeting with Maryam Rajavi, assuring that the German Parliament will continue to support this endeavor.

Maryam Rajavi praised Mrs. Süssmuth for her efforts to defend the PMOI/MEK in Ashraf and support democracy & #HumanRights in #Iran. She said: As the regime no longer has access to the PMOI in Iraq, it is intensifying terrorism and demonization against them. pic.twitter.com/3NHvHC2Ois

Mrs. Rajavi was praised for “making tremendous efforts towards women’s growth and promotion among the ranks of the Resistance” as she emphasized women’s roles in the Iranian Resistance.

The Iranian regime’s nuclear program was also mentioned during the summit. “If we support your effort, it is because this is our struggle,” Mr. Patzelt remarked, alluding to the Resistance’s discoveries concerning Tehran’s nuclear program. You are attempting to prevent the dictatorship from obtaining nuclear weapons, which is something that all people around the world desire. You’ve established an international front against fundamentalism, which is extremely significant.”

Prof. Süssmuth was praised by Mr. Rajavi for her efforts to protect the inmates of Camp Ashraf and to promote democracy and human rights in Iran.

“Now that it can’t fight the Mojahedin as it did in Iraq, the dictatorship has escalated its terrorism and demonization campaign against the MEK overseas,” she said.