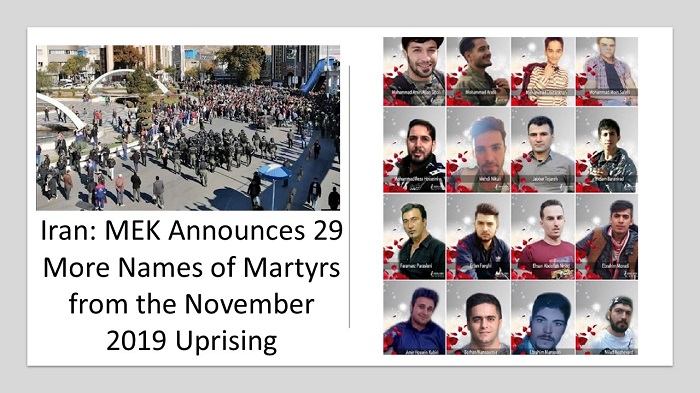 The Iranian Resistance stated on December 15, 2019, that the Revolutionary Guards had martyred over 1,500 demonstrators. In recent months, researchers and experts have calculated that the uprising’s martyrs’ number could be three times higher. politicians

On the eve of the nationwide uprising’s second anniversary in November 2019, the People’s Mojahedin of Iran (PMOI / MEK Iran) released the names of 29 more martyrs. In Tehran, Karaj, Mallard, Shahriar, Qods, Nasimshahr, Isfahan, Kermanshah, Shiraz, Mahshahr, Andimeshk, Eslamshahr, and Meshkinshahr, these fallen heroes were martyred. The MEK had previously publicized the names of 828 martyrs.

On November 17, Khamenei made the criminal order public, calling on the Revolutionary Guards and repressive forces to “carry out their responsibilities firmly.” Khamenei had ordered the shooting of protesters at the start of the movement. “Who is behind the setting of things on fire, destruction, clashes, and fomenting insecurity?” he had asked.

They must comprehend, and most people do. They must keep their distance from these behaviors. This is my command, and all officials in the government must carry it out in accordance with their responsibilities.”

Raisi among the most criminal regime functionaries

On the same day, November 17, in the midst of the uprising, Ebrahim Raisi, the regime’s prosecutors, among the most criminal regime functionaries, issued the following directive to the regime’s prosecutors: “Act decisively in collaboration with the State Security Force and security services against any aggression by mobs, those affiliated with counter-revolutionary currents, and infiltrators who engage in sabotage at the behest of enemies and target the people and society’s security.”

Regime refused to provide the names of the martyrs

Fearing the implications of this massive crime against humanity, Iran’s ruling religious fascism strives to conceal its scope by refusing to provide the number and names of the martyrs, as well as, in many cases, their burial locations to their families.

Hassan Rouhani, his spokesman Ali Rabi’i, Interior Minister Abolreza Rahmani Fazli, the regime’s top coroner, and other officials at various levels had been deferring the release of the martyrs’ identities to each other for months in the hopes that the subject would be forgotten. “The [casualty] figures are in possession of coroner’s office … they can announce them,” Rouhani said on February 16, 2020. The next day, the regime coroner said, “The government must announce the statistics.

The atrocities will never be forgotten

Mrs. Maryam Rajavi, President-elect of the National Council of Resistance of Iran (NCRI), praised the November Uprising martyrs and declared that the religious regime’s and its leaders’ atrocities will never be forgotten.

The international community’s silence and inaction in the aftermath of the massacre of 30,000 political prisoners in 1988, which was carried out by Khamenei, Ebrahim Raisi, and the Judiciary Chief Gholam Hossein Mohseni Eje’i, among others, resulted in the perpetrators continuing to commit atrocities until November 1998 and continues to this day.

Mrs. Rajavi demanded that the UN Security Council be notified of the dossier on human rights violations in Iran, including the atrocities of 1988 and 2019, and that the regime’s leaders be prosecuted in an international tribunal.