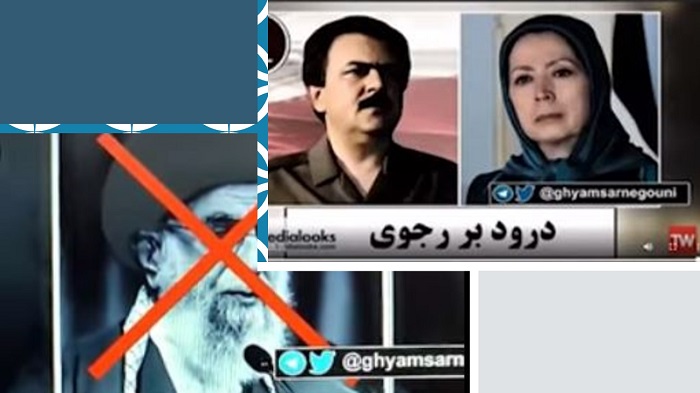 “The [People’s Mojahedin of Iran (PMOI / MEK Iran)] can do whatever one can imagine,” Hesamoddin Ashena, a former deputy intelligence minister and Hassan Rouhani’s advisor, tweeted after supporters of the MEK and Resistance Units disrupted 14 TV and 13 radio channels in Iran on January 27.

Regular programming was halted during the outage. The images of Masoud Rajavi, the leader of the Iranian Resistance, and Maryam Rajavi, the President-elect of the National Council of Resistance of Iran (NCRI), were broadcast, along with the slogan “Hail to Rajavi.” Several state TV networks broadcast a crossed-out image of Supreme Leader Ali Khamenei, with chanting of “Death to Khamenei” overheard. During the broadcast, a portion of Masoud Rajavi’s June 1996 address was aired, with his voice heard during the segment in which he said, “Today, we are still proud of the period when we declared death to the reactionaries.” ‘Overthrow, overthrow, overthrow,’ we said then and we say now.”

The Islamic Republic of Iran Broadcasting (IRIB) organization is one of the regime’s most prominent propaganda platforms. This machinery has been utilized by the dictatorship to broadcast forced confessions, propagate false and twisted material, defame dissidents, and legitimize grave and systemic human rights crimes for more than four decades.

The channels broadcasted a portray of @PMOIRAN Leader #MassoudRajavi and #NCRI President-elect @Maryam_Rajavi.

"Hail to Rajavi" and "Death to Khamenei" slogans were heard. pic.twitter.com/G2JEmfYutP

The MEK shattered the regime’s illusion of invincibility by directly attacking it, especially since the IRIB, according to officials, had numerous layers of security defenses and safeguards against any penetration from the outside and inside.

“This incident was not a simple effort; it was an exceedingly hard job,” IRIB development and technology deputy Reza Alidadi said in an interview with the IRINN TV channel on January 27, referring to the event as a complex undertaking. It was most likely carried out by persons who have access to this technology, who used backdoors and exploited features they had installed on the system to destroy infrastructure.”

On January 27, the Eghtesad Online website cited a previous warning from former IRIB chief Mohammad Sarafraz, which occurred after the hacking of surveillance cameras in Evin Prison last year. “This penetration is a hack,” Sarafraz cautioned, “and it might happen at other organizations.” Officials must fix the problem rather than remain silent or deny it, as they did when secret nuclear documents were stolen.”

Several authorities warned the MEK with retaliation in order to project power in the face of the setback they had sustained. “Despite their diverse political tastes, the ‘people of Iran’ loathe the MEK,” Alireza Salimi, a member of the regime’s Parliament (Majlis), stated in an interview with the Mehr news agency on January 27, an outlet closely affiliated to the Ministry of Intelligence and Security (MOIS).

“MEK members’ hacking of the IRIB will not go unpunished,” he warned. A hack on our gas station system occurred not long ago. These occurrences demonstrate the importance of passive defense in our country.”

“The MEK should wait for a deadly blow,” said Hassan Nowruzi, a member of the Majlis Judicial Commission, on January 31. The MEK’s ‘ineffective’ action was hardly their first. Iran will respond to these activities in a severe and timely manner. Other governments and nations would hit the MEK with lethal force.”

Following his admission in an interview that he was complicit in the regime’s violent crackdown on protestors during the November 2019 revolt, MP Nowruzi has already had a personal run-in with MEK sympathizers. “Who would prosecute us?” he was reported as saying during the interview. What is the Aban Tribunal? “In the streets, I shot rioters.”