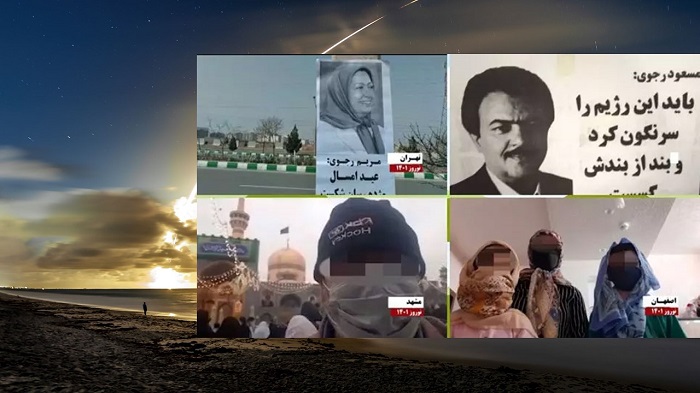 As Iranians welcome the start of the new Persian calendar year and century, the mullahs’ regime has left little for the Iranian people to celebrate and rejoice about. From surging costs and rising inflation to an increase in executions and persecution of protestors, the regime has done everything it can to take smiles off Iranians’ faces and dreams from their hearts.

In defiance of the mullahs’ persecution, members of the Resistance Units, the MEK’s internal network, are celebrating the new year and century by reiterating their determination to overthrow the mullahs’ tyranny and establish freedom in Iran.

In Tehran, the Resistance Units displayed posters of Iranian Resistance Leader Massoud Rajavi, emphasizing that the only way to gain freedom is to destroy the mullahs’ rule. In Tehran, a banner of Maryam Rajavi, the President-elect of the National Council of Resistance of Iran (NCRI), said, “This New Year signals the end of the mullahs’ dictatorship and the beginning of the spring of liberation.” Other posters in Tehran urged Iranian youth to join the expanding ranks of Resistance Units in their mission to keep the spark of resistance against tyranny alight.

In their homes, the Resistance Units decorated their tables with messages of hope for freedom and regime change, paying honour to the dead of the freedom movement and expressing solidarity with the mothers of young protestors killed by regime security forces in recent years.

“I am eager for freedom. This year will be the year the mullahs’ regime is overthrown,” a Resistance Unit member said in her video message.

“This will be the year we liberate the Iranian people from the dictatorial rule of the mullahs,” another Resistance Unit member predicted.

In Isfahan, a Resistance Unit member said, “Spring is the season of breaking the shackles of despair. We will uproot the mullahs’ rule. We will celebrate the next Nowruz in freedom.”

In Hamedan, a member of the Resistance Unit held a sign that said, “The sprouts of freedom will burst the ice of oppression and bask rebellious cities in the promise of spring.”