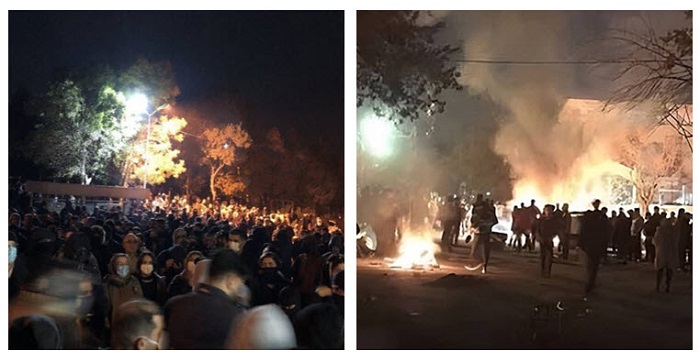 On Thursday night, November 10, the 56th night of the uprising, various areas of Tehran, including North Jannat Abad, Mini City, Shahr Ara, Ekbatan, Bagh-e-Feyz, Sohrvardi, Darband, Shemiranat District 1, Tehranpars, etc. witnessed nightly demonstrations. People chanted: “Death to the dictator,” “Poverty, corruption, high prices, we will march to overthrow,” “We pledge to the blood of our comrades – we will stand until the end,” and “Death to Khamenei.” The youths in Tehran installed a large banner on the Resalat highway reading, “Syed Ali (Khamenei), the dictator, shame on you, your hands are soaked in the blood of our youths.”

In Ahvaz, people in the Shelang Abad area staged a nightly demonstration and clashed with suppressive agents. Defiant youths set fire to the Basij Base in Kut Abdullah by throwing Molotov cocktails, the office of Khamenei’s representative in Homayunshahr of Isfahan, the office of Khamenei’s representative and a member of the regime’s parliament in Chenaran, Governorate office in Mazandaran’s Gelugah, and mullahs’ Seminary in Fuladshahr of Isfahan. Mahabad witnessed nightly demonstrations and control of the streets by young people lighting fires and chanting “Death to the dictator” and “From Kurdistan to Sistan, Iran must be freed.” In Bushehr, the youths demonstrated at night and blocked the road by lighting tires.

A nightly demonstration was held in Qom with people chanting, “Mullahs must get lost.” The people of Marivan demonstrated at night and set up roadblocks by fire. Kerman witnessed nightly demonstrations in Kowsar and Hezaro Yekshab squares and clashes with suppressive agents. Young people set fire to garbage containers in the middle of the street during the nightly protests in Bandar Abbas. A nightly demonstration was held in Rasht, and an agent shot a young girl. In Muchesh of Kamyaran, protesters chanted “Death to the dictator” and blocked the streets by lighting fires. The suppressive agents attacked the people, and the youths clashed with them.

On the occasion of the 40th day of the martyrdom of Mukhtar Ahmadi, the people of Marivan demonstrated at his burial site chanting “Death to Khamenei.” The ceremony of the 7th day of martyrdom of Zeid Karimi, a teenage athlete, who was shot dead by the suppressive forces, was held in Machkeh village of Sanandaj. People were chanting, “Khamenei is a murderer; his rule is null and void” and “For every fallen person, one thousand rises.” Bazaar merchants and shopkeepers in Mahabad went on strike in solidarity with the uprising.

On Thursday morning, the students at Ferdowsi University in Mashhad protested against Ali Bahadori Jahromi, the spokesperson of Ebrahim Raisi’s government, who was visiting the university. They were chanting, “Shame on you, shame on you,” “we do not want a murderous guest,” “You are lewd, but I am a liberated woman,” etc.