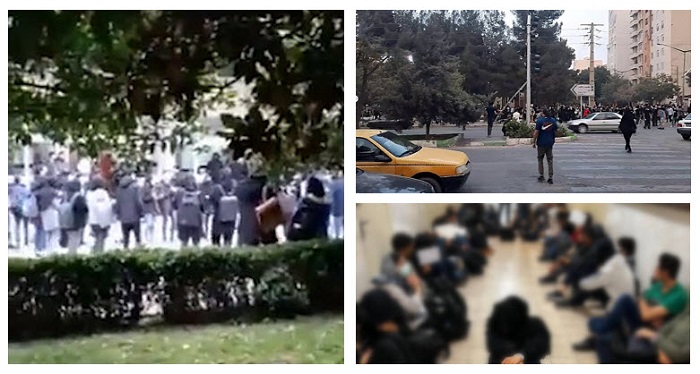 On Saturday, November 12, on the 58th day of the nationwide uprising, protests and strikes continued. The students of the law faculty of the National University protested and chanted, ” Imprisoned students should be released,” and “Cry for your rights.” Students at the University of Science and Culture staged a rally, chanting, “This is the last message; if you execute anyone, we will rise.”

Students of Management and Economics Faculty of Sharif University, Faculties of Electricity and Petrochemistry, Computer and Basic Economic Sciences of the Razi University of Kermanshah, Kharazmi University of Karaj, Hormozgan Medical University, and many other universities staged sit-ins and rallies.

In Saqez, western Iran, shopkeepers went on a widespread strike. Families of arrested protesters gathered this morning outside Evin prison in Tehran to protest the arrest of their loved ones and to ask for their whereabouts.

Protesters confronted Mir Alam Seyyedi, the local head of the regime’s judiciary in Sabzevar, northeastern Iran, on Friday night, November 11. In Ilam, western Iran, youths set fire to the office of a member of the regime’s parliament. In Yazd, central Iran, rebellious youths stained the image of criminal Qassem Soleimani with red paint. In Sardasht, western Iran, locals attacked a paramilitary Basij base and set fire to it and a vehicle belonging to the suppressive forces.

Frustrated to quell the people’s uprising, the Revolutionary Guard Corps (IRGC), in a statement, called for espionage against the People’s Mojahedin Organization of Iran (PMOI/MEK) because of “calling for riots.”

The IRGC statement announced that if “suspicious communications are established with you, requesting actions such as carrying out sabotage actions, setting fire to places, signs, and symbols or writing graffiti, taking photos and filming specific military and religious places, or holding gatherings and demonstrations and so, (be aware that) the MEK has established these communications.

November 12 – Sardasht, northwest #Iran
Locals have been on strike and continuing the nationwide protests against the regime on the 58th day of the uprising.#IranRevolution#اعتصابات_سراسری pic.twitter.com/ZGQlPthJKC

Therefore, inform the nearest IRGC intelligence unit or the News Headquarters of the IRGC Intelligence Organization.”This statement reflects the clerical regime’s comprehensive frustration in facing the MEK Resistance Units and the regime’s fear of increasing popularity and embracing the MEK among the youth.