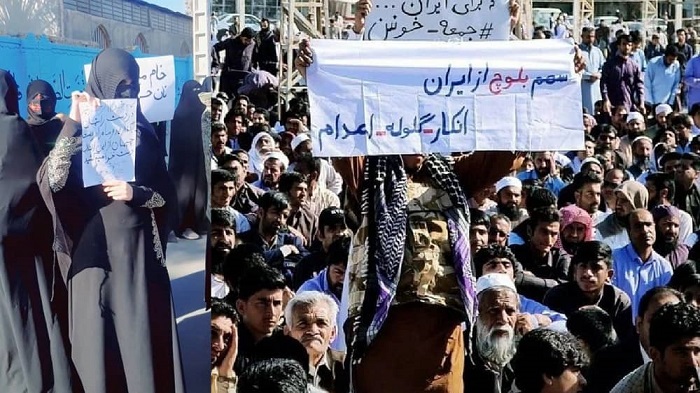 In their protest rally, they chanted “Death to Khamenei,” “Death to the dictator,” “Kurds and Baluchis are brothers; Hate Khamenei to death,” “Khamenei, shame on you, let go of the country,” “Death to IRGC,” “Death to Basiji” and “We don’t want child-killers rule.” Women were chanting, “I will kill whoever killed my brother,” “With veil or without, Let’s go for the revolution” and “You are lewd, I am a free woman.”

Fearing the people’s fury, the regime’s suppressive forces were stationed in various streets of Zahedan, including Khayam and Beheshti. They opened fire on people on Modarres Street and Khayam, Beheshti, and Mirzai Shirazi intersection.

December 2 – Zahedan, southeast #Iran
Protesters chanting "I will kill those who killed my brother!"#IranRevolution2022#زاهدان pic.twitter.com/LGFCT31i4Y

The youth of Zahedan carried a big banner in today’s protest rally, which read: “Iran! Rest assured, the determined Baluchistan, and Kurdistan will not leave you alone.”

In other cities of Sistan and Baluchistan province, including Iranshahr, Khash, Zahak, and Chabahar, large crowds of Friday prayer worshipers staged protests in the streets after the congregation chanting “Death to Khamenei,” “Death to Basiji,” and “Death to the dictator.” In Chabahar, IRGC helicopters were hovering over the city.

Last night, the people of Zahedan went to the streets and chanted against Khamenei. Reinforcement forces from neighboring cities were dispatched to Zahedan and other cities in the province.

On Friday morning, marking the 40th day of Sina Malairi’s martyrdom, a memorial procession was held in Arak, where people chanted, “IRGC, Basijs, you are the same as ISIS”.

Last night, defiant youths attacked the Basij base in district one of the Kermanshah with Molotov cocktails and set a Basij banner on fire in Rask city of Sistan and Baluchistan. The youths attacked the Basij base in Gorgan (Northern Iran), with hand-made grenades and destroyed a large banner depicting Khomeini and Khamenei in Bandar Abbas by throwing Molotov cocktails at them.

Mrs. Maryam Rajavi, the President-elect of the National Council of Resistance of Iran (NCRI), said that today the Baluch compatriots, once again, joined the rest of Iran in unison, to seek justice for the martyrs who sacrificed their lives for the freedom of Iran.

She hailed the brave Baluch women, who highlighted the leading role of the women in the fight against the ruling mullahs with the slogan “with the veil or without it, let’s go for the revolution.” Indeed, those oppressed today will prevail tomorrow. Women and youths are going to sweep the misogynist dictatorship of the mullahs forever.