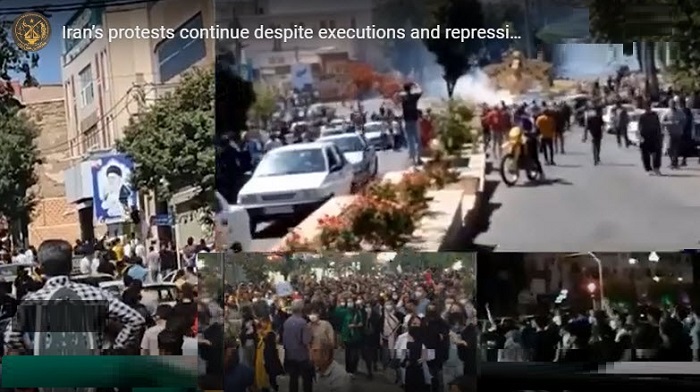 On Sunday, December 27, the 94th day of the uprising, the defiant youth set fire to the Basij base in the Sabalan neighborhood of Tehran. The students of Shiraz University of Medical Sciences staged a demonstration for the second day running chanting “Imprisoned students must be set free” and “Release political prisoners.” A number of artists gathered outside Tehran’s Evin prison.

At Ahvaz Azad University, suppressive agents prevented the memorial ceremony for Donya Farhadi, who was killed by Khamenei’s henchmen and her body was dumped in the Karun river.

On Saturday evening in Tehran, cries of “Death to Khamenei,” “Death to Khamenei the murderer,” “Bloodthirsty Khamenei, we will bury you,” “This year, is a year of sacrifice, Seyyed Ali (Khamenei) will be overthrown,” “Death to the dictator,” “Mullahs must get lost” and “Basij, IRGC is the same as ISIS” resonated in Chitgar, Janat Abad, Marz Daran, Shahran and Sarv Azad neighborhoods. In Bandar Abbas, the defiant youth set fire to Khomeini and Khamenei’s banners on the municipality building with a Molotov cocktail.

Takab, northwest #Iran
Protesters torched the entrance of the home of a local regime agent who provides information about protesters to the regime's authorities and security units.#IranRevoIution pic.twitter.com/rLy2HMtvLh

“Mohsen, Majid, Siavash, fire to be responded by fire,” “No more promises, we are hungry,” and “Political prisoners must be released” at Darvazeh Dowlat, Shariati, Tupkhaneh and Darvazeh Shemiran subway stations. The relatives of detained protesters gathered outside the Evin courthouse to seek information about the fate of their loved ones.

During the attack of the suppressive forces on the inmates at Karaj Central Prison, who were protesting against the transfer of a number of prisoners for execution, and chanting “Death to Khamenei,” at least one prisoner was shot dead in the back of his head at a close range. Dozens were injured, and some of them were taken to the hospital. The head of justice of the regime in Alborz had to admit to the murder of the prisoner and in a ridiculous scenario, he claimed that the victim was killed by another prisoner throwing a rock.

The prisoners’ revolt has spread from Lakan in Rasht and Evin in Tehran to Karaj prison and will extend to all other prisons one after the other as every prison is a center of the rebellion.

Mrs. Rajavi said that the protest in Karaj prison against the arbitrary execution of prisoners with the slogan “Death to Khamenei” is the reflection of the voice of all Iranians who want to end the regime of execution, torture, and terror. The international community must take immediate action to stop executions in Iran.