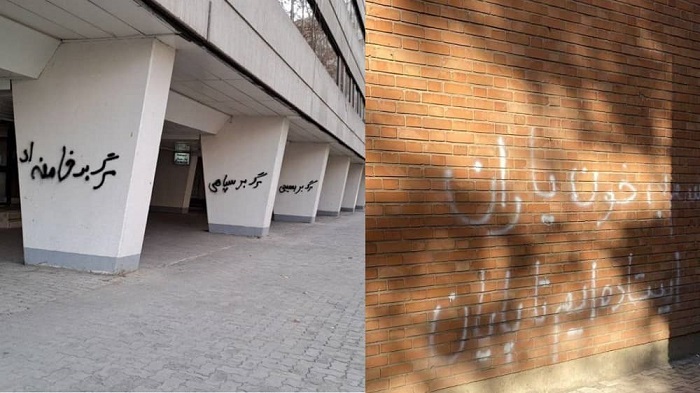 On Thursday, December 22nd, the 98th day of the uprising, the ceremony of the 40th day of martyrdom of Artin Rahmani was held in Izeh. The ceremony was attended by a large crowd chanting anti-regime slogans such as, “Death to Khamenei” “This year, is a year of sacrifice, Seyyed Ali (Khamenei) will be overthrown.” and “Political prisoners must be released.” The ceremony turned into an angry demonstration against the regime. In Karaj, the 40th-day ceremony of Abbas Shafiei was attended by local residents and friends.

In the Behesht Mohammadi cemetery in Sanandaj, the 40th-day ceremonies of Zanyarullah Moradi, Isa Biglari, Aram Habibi, and Hamid Goli were attended by a large crowd chanting “Martyr never dies” and “Political prisoners must be released”. Memorial services were held in Dehdasht for the martyr Mehrdad Behnam Asl; in Izeh for Hamed Selahshur; in  Semirom of Isfahan for the 40th day of martyrdom of Murad Bahramian. In Mashhad, the suppressive agents did not allow people to lay flowers on the grave site of martyr Majidreza Rahnavard.

December 22 – Kamyaran, western #Iran
Locals marking the 40th day of Foad Mohammadi's murder by the regime's oppressive security forces began chanting: "We swear on our compatriots' blood that we will stand to the end!"#IranRevolution2022#فواد_محمدی pic.twitter.com/EPVHFenY5p

On Thursday morning and evening, defiant youths destroyed the regime’s surveillance cameras on the Yadgar Highway in Tehran; attacked the Basij base in Mehrshahr of Karaj with Molotov cocktails; and in Rasht, set fire to a large banner depicting images of Ruhollah Khomeini and Ali Khamenei in Sardar Jangal Stadium.

December 22 – Kamyaran, western #Iran
Locals marking the 40th day of Foad Mohammadi's murder by the regime's security forces:
"This is the last message: one more execution and there will be more uprisings!"#IranRevolution2022#فواد_محمدی pic.twitter.com/noNL9dUK47