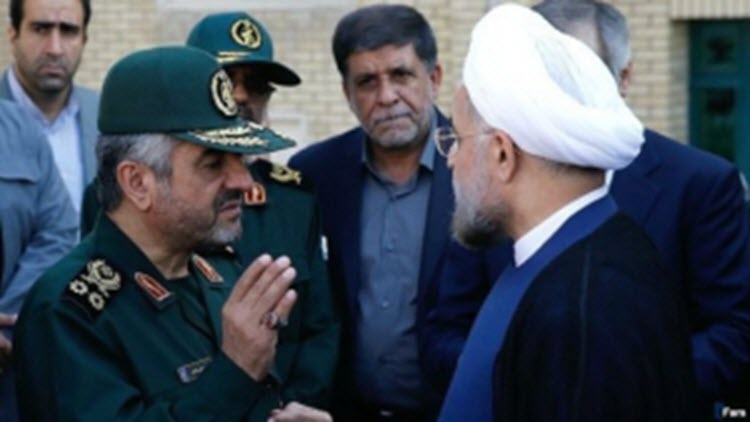 An article in Iran Focus on January 26 reports that Iran currencies aredropping to record lows, but the budget bill for the next Iranian calendar year, March 2017 to March 2018, is being described by economic analysts as a fully military-security budget.

This budget bill has been presented by the cabinet of Iranian President Hassan Rouhani, described as a “moderate”.The recent plummet of Iran’s raised concerns over the country’s economic status, especially with a new administration coming to office in Washington.  “The street value of the rial reportedly hit 41,500 to the dollar on December 26, compared to 35,570 in September and beating the previous low of around 40,000 recorded in 2012,” reports indicate.

$106 billion is what he entire budget bill is estimated to be.  The significant portions allocated to the regime’s institutions involved in domestic crackdown and foreign-bound terrorism/expansionism breaks down like this:

–    Intelligence services and police, including the Ministry of Intelligence, State Police, affiliated entities and Supreme Leader representative offices in universities across the country: $3.29 billion

–    Efforts involved in exporting Islamic fundamentalism and terrorism enjoy a huge budget through various means. This is most specifically provided through budgets allocated to the Islamic Culture and Relations Organization, the Al-Mustafa International University and the so-called “Imam Khomeini Relief Foundation” (the entity specifically involved in supporting Iran’s warmongering and support for unrest in Syria, Iraq, Afghanistan, Lebanon and …): $1.41 billion

In addition to these statistics, sporadic funds are provided to the IRGC, Ministry of Intelligence and the Ministry of Defense under various pretexts.

The total amounts to more than $24.51 billion, equaling to more than 23% of Iran’s upcoming fiscal budget, as cited from Iran’s budget book published by the regime’s Budget and Planning Organization.

Iran’s military budget has experienced a 70% rise during Rouhani’s tenure. This includes the budgets allocated for the IRGC, Basij and the army. Statistics below have been obtained from Iran’s official budget bills:

President Rouhani made the following remarks in an interview with state-run TV, last year:

“There are those who claim our cabinet is focused on the economy, bringing inflation under control, resolving depression, providing health care and foreign policy affairs, and fails to see to defense matters. I must say we have taken significant measures in strategic weapons and beefing the defensive foundations. Such measures during the past two years equal to 80% of the past ten years combined.” (State-run TV, 2 August 2015 – State-run IRNA news agency, 3 August 2015)

In actuality, many believe these numbers to be far from the truth. The important portion of the funds are provided through Tehran’s trade and financial cartels run by the IRGC and Iranian Supreme Leader Ali Khamenei. These include the “Setad Ejraiye Farmane Hazrate Emam” – Headquarters for Executing the Order of the Imam; the IRGC construction wing Khatam al Anbia, “controlling at least 812 affiliated companies worth billions of dollars and deemed by Washington ‘proliferators of weapons of mass destruction,’” as explained by Reuters; Bank Ansar; Ghadir Investment.

Factual or not, the statistics mentioned above clearly show an escalating trend in such spending under Rouhani’s watch, which may be attributed to Iran’s involvement in the wars of Syria and Iraq, and arise from the failed U.S. administration rapprochement policy, releasing billions after the highly controversial Iran nuclear deal.

Iranian opposition leader,Maryam Rajavi, President of the National Council of Resistance of Iran, an umbrella group of Iranian dissident entities, including the People’s Mojahedin Organization of Iran (PMOI/MEK). said. “The regime in Tehran is the source of crisis in the region and killings in Syria; it has played the greatest role in the expansion and continuation of ISIS. Peace and tranquility in the region can only be achieved by evicting this regime from the region.”

The massacres in Aleppo were only  latest result of Iran’smilitary spending. The rise in defense/security budgets for Tehran, means the regime is gearing up for more tumultuous times ahead.  And, while Rouhani boosts the defense budget, Iran’s currency fall can be attributed to economic qualms around a Donald Trump U.S. presidency and Iran’s own presidential elections just around the corner.