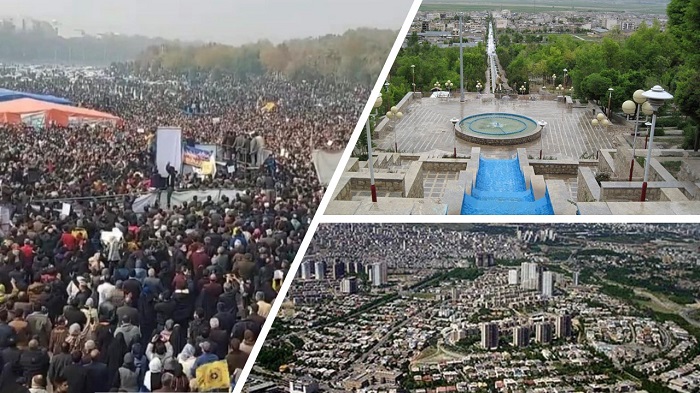 Thousands of people from Chaharmahal and Bakhtiari Provinces demonstrated in Shahrekord, the provincial capital, on November 22, 2021, for the second day in a row to protest the shortage of water and the clerical regime’s plundering practices.

Protestors marched from Revolution Square to the Governor’s Office, where they assembled the day before yesterday. “Bakhtiari dies, will not accept humiliation,” “Beware of when we pick up our guns,” “Shame on the state radio and television [for censoring news of our protests],” “Lorestan, Khuzestan (provinces) support our protests,” “Chaharmahal and Bakhtiari people will not allow their water to be taken away,” and “The shameless officials plundered the water” were among the chants heard during the demonstration The protestors promised to keep demonstrating in the coming days until their demands were met.

#Iran Protests – #Shahrekord’ s uprising to protest the lack of water. Protesters chant: “Bakhtiari dies, does not accept humiliation”. ​@Maryam_Rajavi​ hailed people of Shahrekord who rose up in the wake of protests in #Isfahan against the regime’s plunder of water resources. pic.twitter.com/fwVsy2Seel

Iran is currently experiencing one of the worst droughts in its history. The government claims that is due to the decrease in rainfalls, however, according to environmental experts, it all points to the mullahs’ management of the natural resources.

The People’s Mojahedin of Iran (PMOI / MEK Iran), and the National Council of Resistance of Iran (NCRI), reported that Iran is taking groundwater indiscriminately at a rate of 70% higher than the rest of the world.

As a result, it has developed into the world’s worst subsidence country. The leadership, on the other hand, continues to assert that the country lacks the capacity to store water.

The Ministry of Water and Electricity, as well as the Ministry of Energy, used rudimentary methods to deliver enough water to the population, with the support of MPs and their nonsensical plans.

Thousands of wells and dams were erected around the country by the regime, disrupting the natural equilibrium of the surrounding ecosystems.

After forty years of destruction, there is no water for agriculture, and the majority of farmers are immigrating to the cities, disturbing the demographic balance and overloading cities.

Mrs. Maryam Rajavi, the President-elect of the NCRI, praised the honorable people of Shahrekord for rising up in the aftermath of Isfahan’s protests against the regime’s water looting. From Khuzestan to Isfahan and Shahrekord, the Iranian people stand up, she remarked. They refuse to live under the burden of the mullahs, who have robbed them of their water and air. The only way out is to abolish the oppressive regime of the mullahs.