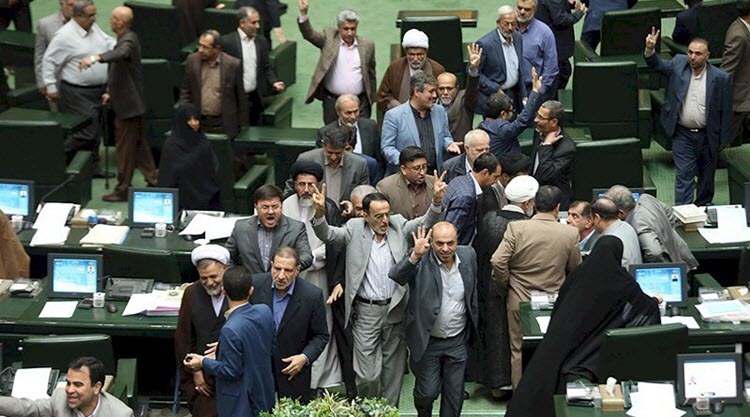 Ahmad Tavakoli, former Iranian MP, and Abbas Abdi, member of the what is known as the “reformist” camp in Iran, issued a joint statement regarding institutionalized financial and economic corruption in Iran, calling senior officials “concession greedy” and stating that “this corruption will eventually find more depth, and today we are faced with systematic and networked corruption.”

According to the Alef website, they added, “In this phase the very oversight bodies involved in the fight against corruption will become influenced and corrupt individuals and begin supporting each other in a networked manner. This in itself will become part of the reason of this situation continuing.”

In a state TV interview, Ahmad Amir Abadi Farahani, a member of the Iranian Parliament’s Board of Directors, joined Tavakoli in speaking about the non-transparency of campaign spending in parliamentary, city council and presidential elections in Iran.

“Unfortunately, there is no transparency and if there was transparency there would be no trade for influence,” he said. Tavakoli added, “Some MPs have spent from 1 to 3 billion tomans (equal to $285 to $735 million).”

According to an article published by the National Council of Resistance of Iran (NCRI), “Lack of attention to non-transparent spending will lead to financial misuses in candidates resorting to election propaganda. As political and economic corruption is institutionalized in this regime, the lack of transparency in election expenses has become a systematic subject. This is due to the election infrastructure that has failed to provide a method to prevent non-transparent spending in the election campaign, leading to candidates taking advantage of this loophole.”

According to Ahmad Amir Abadi, member of the Iranian Parliament Board of Directors, the four-year salary of an Iranian MP is 250 million tomans a month (around $70,000). “Now, where does such an individual come up with $2.5 billion, I don’t know and it’s a whole different story,” he said, adding, “A person in the Parliament suggested we should add another 5% to the customs on foreign vehicles, and this 5% should be used to purchase more ambulances. At that very time I was aware that one person released 2,000 foreign vehicles from the customs and through this 5% he profited around 3 billion tomans (over $850,000).”