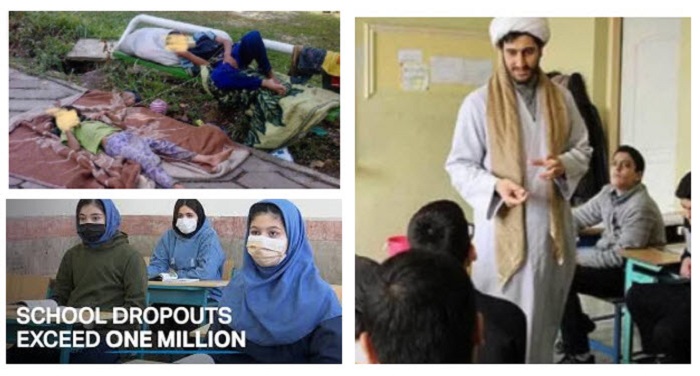 Dropping out of school to work and help their families has become one of Iran’s most pressing social issues. Many children are forced to stop studying before they have the opportunity to properly begin their education and build their own future, leaving these dropouts with extremely bleak economic and social prospects.

Millions of children and youth are routinely denied or have limited access to education across the country. Those who are fortunate enough to have access to some form of public education often only receive a primary education, which is insufficient to help these children build a better future for themselves.

Even for those who do attend high school, the prospects for a future based on their education are dim, prompting many students to drop out, in addition to those who are forced to leave at the beginning of their education. This crisis has resulted in a society where children are abandoned on the streets and must fend for themselves. The number of these children in Iran has now surpassed one million.

We can find thousands of reasons and statistics for such a situation by looking at recent publications from the Iranian regime’s media outlets. Many of these state-run media outlets are obfuscating the true cause of the crisis, which is government corruption, inequality, and misguided educational policies. In 2021, “210,000 elementary school students and 760,000 high school students” dropped out of school, according to Alireza Kazemi, the regime’s acting Education Minister.

The Iranian Statistics Center announced that “about 970,871 thousand students” dropped out of “primary and secondary schools” in the academic year 2020-2021. The number of school dropouts in Tehran is the highest in the country. We can only imagine how bad things are in other parts of the country, particularly in poor and border areas.

“Tehran is one of the cities with a high number of working children and school dropouts,” said Behrouz Nazari, Director of the Research Group on Education and Studies Development and the Development of the University Jihad Organization.

“Environmental poverty causes children to be sent to work centers instead of studying,” he added, completely ignoring the regime’s corruption and social inequality in Iran.

Along with the alarmingly high number of dropouts in Iran, another factor contributing to the crisis is the decline in the quality of education provided to children. Many officials are blaming the situation on the coronavirus, but the issue existed long before the pandemic. Many families were forced to keep their children out of school because they couldn’t afford tablets or laptops.

“I’m talking about the low quality of education in the pre-Coronavirus era, when reading, writing, and literacy skills in education were not of high quality, even at that time,” Alireza Kazemi explained.

This is a tragic situation for the country’s future and hope. The acceleration of dropouts cannot be compensated with the spread of such systematic destruction, and it will only harm future generations and, as a result, the country’s progress.

During Obama’s presidency, the US government gave the regime approximately $1.7 billion in cash. Simply calculated, the regime could eliminate unemployment and child labor, and dropout crises with half of this money, but given the regime’s priorities, such as nuclear and missile projects, this is unthinkable.