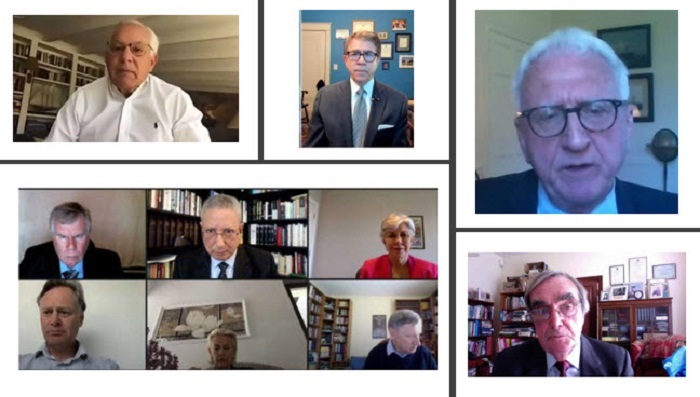 A group of prominent politicians and former officials joined the Iranian coalition opposition National Council of Resistance of Iran (NCRI) in an online conference on May 10, 2022, calling on world powers to dismantle the terrorist network run by the Iranian Ministry of Intelligence and Security (MOIS) around the world.

As the keynote speaker, NCRI President-elect Maryam Rajavi congratulated the appeal court on its decision to condemn bomber terrorists. On July 30, 2018, Assadollah Assadi, an Iranian regime diplomat terrorist, and three accomplices staged a bomb plot against the NCRI annual gathering in Villepinte, a Paris suburb.

Fortunately, the plot was discovered and the terrorists were apprehended in a coordinated operation by Belgian, French, and German authorities. Mrs. Maryam Rajavi was the terrorists’ primary target, according to new evidence.

Prosecutors discovered a green notebook belonging to Assadi during their investigation, which was the key to an expanded MOIS terror network across Europe. Nasimeh Na’ami, Mehrdad Arefani, and Amir Sa’douni, for example, were members of the regime’s sleeper cell.

Assadollah Assadi was sentenced to 20 years in prison by a Belgian court in Antwerp city on February 4, 2021, despite Iranian regime diplomatic pressure and indirect terror threats. Na’ami received an 18-year sentence, Arefani received a 17-year sentence, and Sa’douni received a 15-year sentence. The “diplomat” refused to propose an appeal, citing a fear of further investigation into high-ranking officials’ involvement in the plot and further scandal.

“The Antwerp Court of Appeals ruling, which the NCRI President-elect Maryam Rajavi described as the clerical regime’s decisive defeat in avoiding legal condemnation,” she said. “Congratulations on the Iranian people’s and Resistance’s great victory over the mullahs’ Intelligence Ministry, the judiciary, and the entire terrorist and religious dictatorship that rules Iran.”

“The international community must recognize that justice is a work in progress. Former US Senator Robert Torricelli said, “The same diplomatic core that planned to plant a bomb in Paris still exists, and they sit at the negotiating table with the US and other powers.”

“There can be no justice unless the regime responsible for our deaths is held accountable.” We urge Europe to reconsider its position. Do they want embassies in their countries that have killed their citizens and detonated a bomb in Europe?

“The regime has made an enemy of its own people over the course of four decades.” The regime’s biggest threat is the people’s demand for change. To stay in power, this regime will go to any length. Mrs. Rajavi, the leader of the democratic and secular alternative inside and outside Iran, was the main target. She is a symbol of hope for Iran’s future.”

“We were all targets.” The NCRI and the People’s Mojahedin of Iran (PMOI/MEK) are two of the three most serious threats to the Iranian regime, with truth itself as the third. That’s why we all came together at the rally. Iran’s people do not have freedom. Inside Iran, terrorism is far more heinous than what is exported outside.” Wesley Martin, retired US Army Colonel said.

“Dealing with the Iranian regime does not require appeasement or concessions; it requires firmness, strength, and resolve.” Despite knowing the truth about Iran, our government continues to try to appease the regime. The MOIS was proven to be a terrorist organization in 2018. I implore our government to follow Europe’s lead.”

According to former UN official Taher Bumedra, this ruling is the result of an independent and impartial judicial system. “This is the result of a judicial system that is truly independent and impartial.” Mr. Bumedra stated, “It is now up to the governments to follow that path and take appropriate measures to put an end to the regime’s terrorism.” “The regime’s leaders must face criminal charges, and its spies must be expelled.”