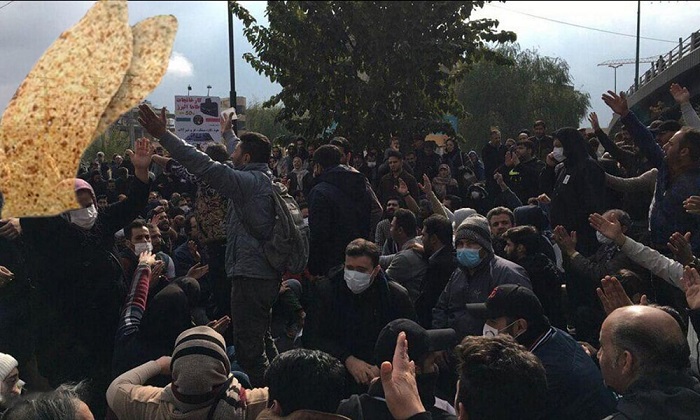 On May 5, the prices of bread and pasta, two foods that the Iranian public could still afford, skyrocketed dramatically. Many economists and regime officials blame the increase on the elimination of the “preferential rate” for grain imports. Protests have been called by people from all walks of life, and locals in Khuzestan have taken to the streets.

“People have been crushed by the skyrocketing prices. The government promised to assist people by providing coupons, but it has failed to do so. The current situation has heightened public discontent.”  Mostafa Mirsalim, one of the regime’s MPs, told the state-run Entekhab website on May 6 that he fears the delay will lead to protests.

On May 6, the state-run Tabnak website quoted MPs saying, “the government’s plan to help people in terms of coupons and subsidies would allow them to have one-seventh of a bread.”

“We have 9 million families under the poverty line. We cannot resolve people’s economic woes by digging our hands deeper into their pockets. We wouldn’t eradicate poverty in this way.”  On May 6, the state-run Entekhab website quoted MP Mohammad Asafri as saying, “We would only increase it.” “Prices are rising, and if this trend continues, the national capital’s [regime’s] security will be jeopardized,” Raisi executive vice president Solat Mortazavi said on May 5, according to the official IRNA news agency.

Raisi’s government and the regime’s hand-picked parliament approved eliminating the so-called “preferential currency rate,” or the official rate of 42000 rials per dollar, after months of back-and-forth. The preferential rate was introduced by Hassan Rouhani’s government in 2016 in an attempt to stabilize the market and prevent protests as the prices of basic consumer goods soared.

Importing essential goods like grain and medicine was done at the official exchange rate. The regime’s institutionalized corruption eventually tripled prices, but removing the preferential rate quadrupled the cost of basic necessities.

“The reason for the current unprecedented skyrocketing prices is eliminating the preferential rate by the government and parliament. By removing the official exchange rate of 42000 rials per dollar, the government would earn 50,000 trillion rials. This is the wealth of the people,” Heshmatollah Falahatpished, a former top MP, acknowledged on Twitter on May 7. Falahatpishe served as the regime’s envoy to Syria in 2015 and later admitted that they had given $30 billion to Bashar-al Assad’s dictatorship, which is backed by Iran.

“How come prices are skyrocketing when the government has reduced inflation and fixed the currency rate?” This is a family issue. Raisi’s father-in-law, Ahmad Alam-al Hoda, the Supreme Leader’s representative in Khorasan province, said, “The mafia has its roots in the government.” On May 6, the state-run Aftabnews website quoted Raisi’s staunch supporter as saying, “These skyrocketing prices endanger people’s lives and our [security].”

As prices rise, more officials are warning of a people’s uprising that they cannot ignore.”Bread’s skyrocketing price, which is people’s main food, would force people to fight for survival, which would be dangerous.” According to Aftabnews, MP Ahmad Naderi warned on May 6 that the president should act before it’s too late.

“Mr. President, there will be no revolution if we fail to manage the economy and inflation; we should wait for a revolt.” The uprising of the hungry people is more dangerous than the revolution. “Let us come up with a solution before it’s too late,” mullah Fazel Meibodi warned Raisi on May 6, as per state-run Khqbaronline.