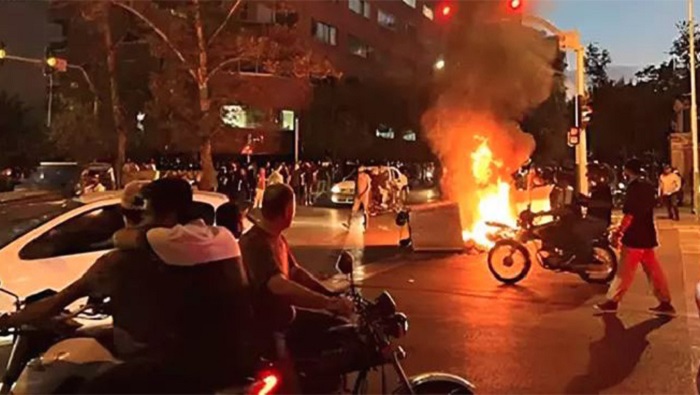 On Sunday, Iran’s nationwide uprising will mark its 45th day. Demonstrations throughout the country have gathered momentum following the death of Mahsa Amini, a 22-year-old woman who had been arrested by morality police in Tehran on September 13 for an alleged breach of the country’s strict dress code for women.

Protests have now spread to at least 203 cities. According to sources from the Iranian opposition People’s Mojahedin of Iran (PMOI/MEK), the regime’s forces have killed over 450 people and arrested over 25,000. The MEK has released the names of 300 protesters who were killed.

The protests on Sunday began with yet another wave of student demonstrations across the country. There were protests in Tehran, Babolsar, Zanjan, Shiraz, Sanandaj, Mashhad, and Zahedan.  Following the assault on Tehran’s Sharif University of Technology earlier this month, regime authorities deployed forces to two campuses in the capital and Mashhad, where anti-regime dissent has been growing.

At the same time, primary and secondary school students demonstrated in the streets of several cities. Despite warnings issued by Hossein Salami, the top commander of the Revolutionary Guards (IRGC). Security forces attacked students in several locations, and reports from Tehran indicate that security forces are firing directly at students with firearms.

On Sunday, additional protests were held in a number of cities, including Mahabad, Bukan, Kerman, Sanandaj, and Ravansar. Protesters set fire to the streets in several cities, preventing security forces from taking control.

October 28 – Bukan, northwest #Iran
Scenes of confrontations between protesters and the regime's security forces in this restive city.#IranRevolution2022#آزادی_آزادی_آزادی pic.twitter.com/XW6yBHhcG1

Cities in Iran’s Kurdish regions protested on Saturday, with residents taking to the streets in Sanandaj, Saqqez, Mahabad, Bukan, Baneh, and other cities. People across the country are chanting various slogans, including “Death to the dictator!”, a reference to the regime’s Supreme Leader Ali Khamenei, and “Death to the oppressor!” “Whether it’s the Shah or [Khamenei]!”

The protests began on Saturday with student rallies across Iran. The situation is especially tense in Mashhad, where security forces have surrounded Azad University and cracked down on students since the evening. Security forces are seen in videos violently beating and arresting students.

Protests were held in Tehran, Ahvaz, Kerman, Babol, Lorestan, Kermanshah, and Qods City, according to reports. Students across Iran demanded the mullahs’ removal, chanting anti-regime slogans such as “Death to the dictator!” “Liberty! Freedom! Freedom!”

On Saturday, locals gathered in Arak for the funeral of Mehrshad Shahidi, a 19-year-old youth who was killed by security forces in recent days. The funeral quickly turned into an anti-regime rally, and security forces attacked the rally, attempting to disperse the protesters by opening fire, but were met with fierce resistance.

Iranian opposition President-elect Maryam Rajavi of the National Council of Resistance of Iran (NCRI), praised Iran’s college students for their brave stance, particularly in the restive cities of Tehran and Mashhad. “IRGC troops and special guards have surrounded Tehran’s School of Technology in Amirabad and Mashhad’s Azad University. I appeal to the courageous youths and people of Tehran and Mashhad to rush to their aid and break the blockade. Nothing is more powerful than people’s unity and fighting spirit,” emphasized the NCRI President-elect.

On the 42nd day of #Iran uprising, protesters including freedom-loving doctors, staged #IranProtests in Tehran, Karaj, Tabriz, Isfahan, Borujen, and Shiraz calling for the overthrow of the clerical regime, the enemy of Iran and Iranians. They will win victory.#IranRevolution pic.twitter.com/KZJF9BZfuG