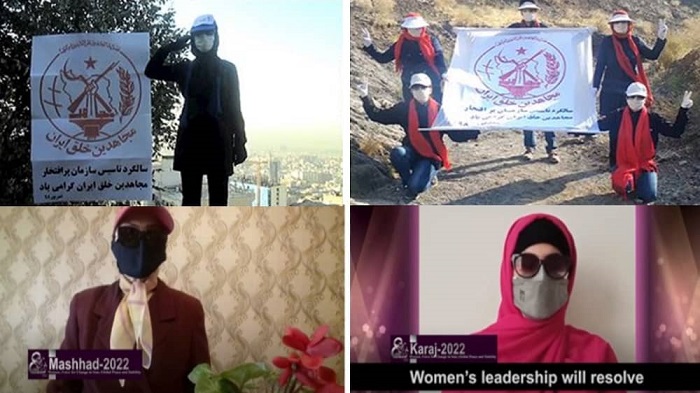 Tehran’s youth performed that brave act despite knowing that even the slightest association with the opposition has serious consequences. Their actions foreshadow a growing trend of youth joining the MEK’s Resistance Units network in the ongoing uprising, which has alarmed the regime.

“We must address our shortcomings and attract youth, our children, to the system. If the younger generations knew about the MEK grouplet’s crime, they would never follow them,” Ramezan Sharif, the Revolutionary Guards (IRGC) spokesperson, told the state-run Fars News Agency on January 2, 2023.

“We owe an apology to our dear youth for failing to educate and emancipate them. “The enemy now wants to turn the younger generation against us,” IRGC Brig. Gen. Mohammad-Hossein Sepehr, Deputy Minister of Interior, said on state television on January 3.

January 3 – Tehran, #Iran
Locals chanted anti-regime slogans:
"Death to Khamenei! Hail to Rajavi!"
"We're the MEK & we're fighting the mullahs!"
"We have written with our blood that we sacrifice our lives for the people!"#IranRevolution2023#FreeIran2023pic.twitter.com/f3YIe79YAX

The persistence of what many regards as a revolution in the making in a country where the entire military and security apparatus is designed to crush popular protests suggests that this uprising is well-organized. Looking into the gloom to see the role of the MEK’s Resistance Units as a driving force behind these protests is unnecessary.

Officials have attempted to portray the growing trend of young people joining the MEK’s Resistance Units, or the organization’s strategy of overthrowing the regime at any cost, as a result of social media and the regime’s failure to “educate” the youth.

On the contrary, the clerical regime has squandered billions of dollars of national wealth by demonizing the MEK. This includes making hundreds of so-called documentaries against the organization, as well as publishing numerous books and thousands of hit pieces. The mullahs have used their extensive network of “friendly journalists” in Western media outlets to repeat the regime’s talking points about the MEK, portraying it as a fringe grouplet with no popular support.

"Documents pinpoint student leaders as inspiring the protest, with #ResistanceUnits standing up to #Iran's paramilitary guards despite crackdowns on #IranProtests sparked three months ago over the death of Kurdistan woman #MahsaAmini," wrote @MailOnline https://t.co/JI58GnltuB

Aside from the undeniable presence of MEK supporters in the current uprising, officials like Khamenei’s pathetic admission of failure to prevent youth from approaching the MEK debunks all the allegations Tehran and its apologists have been making for years.

These facts only serve to emphasize the Iranian people and their organized Resistance movement’s unwavering determination to destabilize the regime and establish a democratic country. The regime is concerned about this outcome and has mobilized its forces to combat it. The international community should not remain silent in the face of the regime’s brutality and should recognize the Iranian people’s desire and will for regime change.