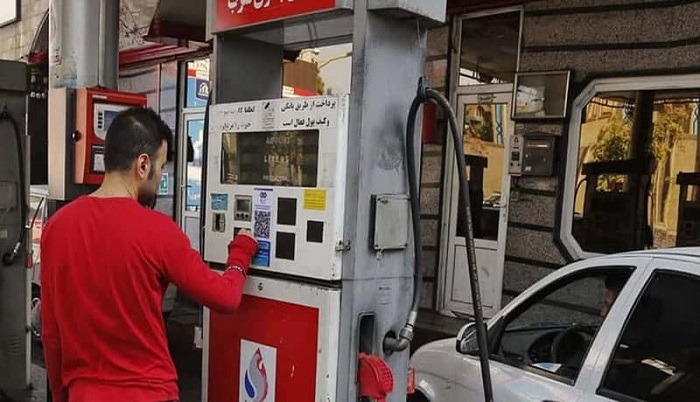 This plan will drastically cut the amount of monthly subsidized fuel that car owners in Iran will receiveOn Monday, December 27, Iran’s Oil Minister, Javad Owji, declared that all Iranians would receive “15 liters of fuel at a monthly price of 15,000 rials.” People may either utilize their share of the fuel, sell it, or receive a total of 225,000 rials under this scheme. The regime’s new strategy of plundering Iranians is the so-called “fuel for everyone” initiative.

Plundering Iranians is the so-called “fuel for everyone” initiative.

The scheme, which is already being tried in regions of Iran, provides individuals with 15 liters of subsidized gasoline every month. This plan will drastically cut the amount of monthly subsidized fuel that car owners in Iran will receive. As a result, they’ll have to pay market prices for the rest, which are at least double the price of subsidized fuel.

In Iran, the average daily use of gasoline is roughly 85 million liters. Assume that each individual receives 15 liters of gasoline every month, or half a liter per day. In that situation, the government’s total daily delivery of gasoline to 83 million citizens will be roughly 41 million liters. The remaining items must be purchased for 220,000 rials. In other words, Ebrahim Raisi’s government’s revenue would increase by at least sixfold.

Officials from the regime assert that the “fuel for all” program allows people who do not possess a car to receive gasoline subsidies. At the free-market dollar exchange rate, the daily sale value of 41 million liters of gasoline to the public will be around 615 billion rials or $2 million per day. Meanwhile, the domestic sale of the remaining 44 million liters of gasoline, or its export at 220,000 rials a liter, yields daily revenue of 9.68 trillion rials, or more than $32 million.

“Currently, the government sells 85 million liters of gasoline per day in domestic markets, with 70% of that being subsidized fuel and 30% being sold at 30,000 rials a liter. On December 27, the state-run Asr-e Iran website said that the regime earns roughly 1.7 trillion rials every day.

Tehran needs every asset to finance its nefarious ambitions

“By allocating the subsidized gasoline to individuals, the government will receive roughly 10 trillion rials per day,” according to the state-run Asr-e Iran website.

This is the regime’s latest strategy to conceal its vast budget deficit. Tehran needs every asset to finance its nefarious ambitions, therefore it goes to great lengths to create revenue. In truth, the administration is laying the groundwork for higher fuel costs. Many Iranian energy experts recently stated that raising fuel prices is “inevitable” as the only way to “increase gasoline production capacity.” They have, however, expressed concern about the societal effects of rising fuel prices.

We have no choice but to raise fuel prices

“We have no choice but to raise fuel prices in order to increase gasoline production capacity.” On October 26, Hassan Moradi, one of the regime’s energy specialists, informed the state-run IMNA news agency that “to calculate the amount of this price increase, we must thoroughly examine the situation of the society.”

It’s worth noting that the major Iran protests that began in November 2019 were sparked by a threefold increase in fuel prices. This uprising shook the regime’s foundations, and the mullahs have been plagued by its consequences ever since.