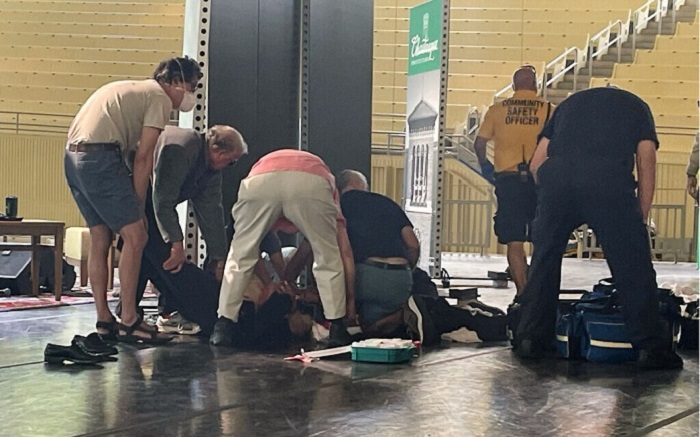 As the world’s attention is drawn to the status of negotiations between world powers and the Iranian regime over the latter’s contentious nuclear program, it is critical to keep a close eye on terror threats emanating from Tehran’s ruling mullahs and their entire terror machine apparatus.

Last Friday, the world was shocked to know that writer Salman Rushdie had been stabbed in western New York state. The National Council of Resistance of Iran (NCRI), an Iranian opposition coalition, issued a statement strongly condemning the heinous attack.

This attack was completely driven by the 1989 fatwa issued by former Iranian regime Supreme Leader Ruhollah Khomeini. For the past three decades, the current Iranian regime’s Supreme Leader, Ali Khamenei, and other clerical leaders have repeatedly vowed to carry out this anti-Islamic fatwa.

Encouraged by the West’s appeasement policy, numerous Iranian officials and state media outlets have praised Rushdie’s assailant and literally expressed their joy in the aftermath of this heinous act. Javad Karimi-Ghodousi, a member of the regime’s Majlis (parliament) and the National Security Commission, told the semi-official ILNA news agency on August 15 that the regime could pay money to hire hitmen in New York to carry out assassination plots against US officials.

“We don’t need to send Revolutionary Guards (IRGC) forces to the US to exact revenge on US officials… this can be carried out if we pay people in the streets of Manhattan and other parts of New York,” he said. Regarding the attack on Salman Rushdie.

This regime MP added, “This is evidence to deny the White House’s claim that the [Iranian regime] has dispatched an IRGC member to the US to assassinate John Bolton, the former US president’s National Security Advisor. There are proud people in that country who are aware of our position and are eager to pull the trigger. Wherever they find the opportunity, they will take revenge from [Donald] Trump, [former U.S. Secretary of State Mike] Pompeo, and others like them,” Karimi-Ghodousi added.

IRGC plot to assassinate @AmbJohnBolton is alarming. Regime’s president was involved in the massacre of political prisoners &1500 protesters. Now, he is embarking on assassinating foreign politicians. Raisi must not enter the US&UN. He must be arrested &prosecuted #NoVisa4Raisi

These threats are also the flip side to recent boasts by senior regime figures that they were only a few steps away from producing nuclear weapons.

Former Iranian foreign minister Kamal Kharrazi, now a senior adviser to Iranian regime Supreme Leader Ali Khamenei, boasted on July 17 that the Iranian regime had crossed the nuclear threshold. He specifically stated, “We have the technical capability to produce a nuclear bomb.”

It is important to note that this nuclear agreement will give the IRGC and its Quds Force more funding to carry out more terror operations around the world, including assassination plots.

1. The clerical regime will not abandon the project to obtain a nuclear bomb. Today, regime officials brazenly talk about their intention to build an atomic bomb. Firmness is required to prevent a terrorist dictatorship from being equipped with nuclear weapons. #Iran #JCPOA pic.twitter.com/TPDlExoKr3

Washington should take this matter seriously and take a firm stance. The Justice Department of the United States should begin by apprehending all members of the Iranian regime’s network of terrorists and would-be assassins on American soil, disrupting their operations, and sending a message to Tehran that such actions will not be tolerated.

In addition, the United States should quit the nuclear negotiations with Iran right away and resume enforcing specific sanctions against the government and the IRGC.

By denying Raisi a visa to attend the United Nations General Assembly next month, Washington should send a message to Tehran that their terrorism and assassination plots will not be tolerated.