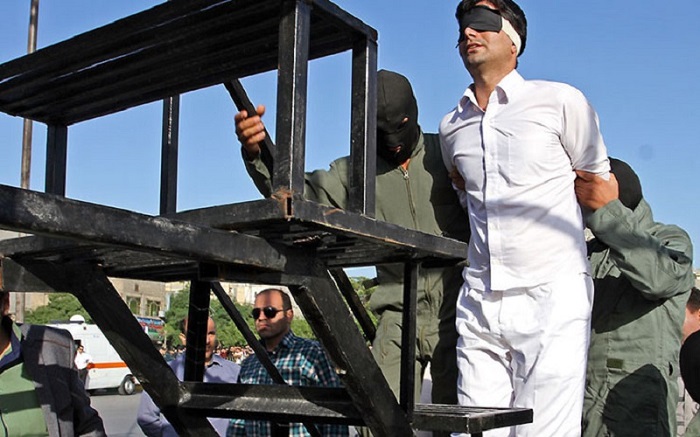 The regime’s dramatic increase in executions over the past few weeks was the second crime. The regime alone has executed 57 prisoners in the last 20 days. In a rare occurrence, the families of death row inmates are holding a week-long vigil outside the regime’s judiciary in Tehran. Holding signs and chanting “No to executions,” they are pleading with the regime’s authorities to stop all executions.

It is clear that the regime is becoming increasingly afraid of the rising anger of the general population. Political prisoners from Karaj’s Gohardasht prison have joined the protests by expressing their support and denouncing the atrocities committed by the regime.

In a Twitter campaign on September 13, Iranians who value freedom from all over the world showed their support for the victims’ families. They demanded that Iran abolish the death penalty.

“There is no doubt that the families of the victims must endure thousands of times the nightmare of the execution of their beloved even before its implementation,” political prisoners emphasized in an open letter.

It should be noted that the brutal punishments of the regime only ever apply to the country’s poor people, while its dishonest officials have never been subjected to just punishment.

Ali Najafi Nia, a lawyer, and professor of criminology discussed the injustice of the regime in an interview that was published by the state-run daily Khabar online on September 1. He asked, “have you ever seen that one of the children of the officials has been degraded in public? Do you have ever seen a corrupt official being punished? We are now facing a crisis of public trust.”

The regime’s increasing cruelty has sparked international outrage. “I stand in solidarity with relatives of death row prisoners in Iran who are protesting bravely to stop the execution of their loved ones,” Gerald K. Folkvord, a political adviser at Amnesty International Norway, wrote in a tweet. “Iran’s authorities must abolish the death penalty, which is the ultimate cruel and inhumane punishment.”

The director of Amnesty International Belgium, Wies De Graeve, also posted a tweet with the following message: “We stand in solidarity with anguished relatives of death row prisoners in Iran who are protesting bravely to stop the execution of their loved ones. Iran’s authorities must abolish the death penalty, which is the ultimate cruel and inhumane punishment.”