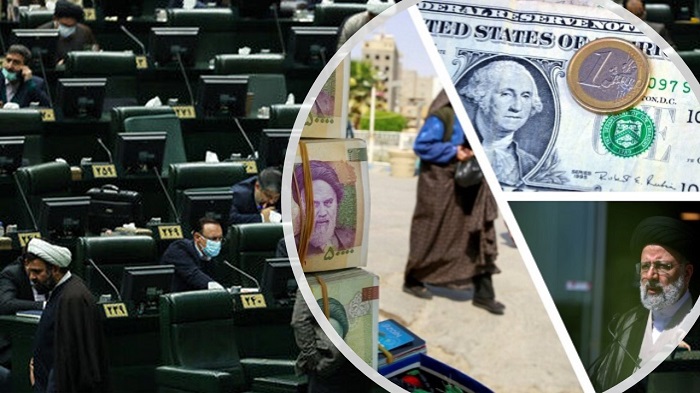 As the Majlis (parliament) continues to debate the budget bill for the coming Persian calendar year, the mullahs’ regime’s inherent corruption and economic woes become more apparent. The intention to abolish the “42,000-rial exchange rate,” which has been the topic of heated controversy in recent months since it was proposed in the budget bill, was discussed in part at the Majlis’s Sunday confidential session.

Iran is one of the few countries in the world with two different currency exchange rates. One is the free-market rate, which is determined by the currency market’s supply and demand dynamics. The current free-market rate in Iran is roughly 260,000 rials per dollar.

The other is the official, government-controlled currency rate, which has remained constant at 42,000 rials per dollar. Limited quantities of the official exchange rate are available to specific industry and regime bodies.

The 42,000-rial dollar, for example, was supposed to be made accessible for necessary food and medical imports to insulate the price of essential items from rial currency volatility. However, the price of most basic products, including those imported at the official exchange rate, has skyrocketed in recent years.

The reason for this is that the Revolutionary Guards and other corrupt regime organs control Iran’s economy, currency, and capital markets. They use their political clout to gain exclusive access to government-regulated currency and profit handsomely from the difference between official and free-market exchange rates. Much of the money that was supposed to go toward subsidizing living costs, healthcare, and other essential requirements are instead pocketed by corrupt groups and politicians who have no regard for the Iranian people’s well-being.

As the government suffers major budget difficulties, the Majlis is currently debating whether or not to abolish the 42,000-rial exchange rate. According to Shams Al-din Hosseini, a former economy minister, and MP, the government is facing a budget deficit of 4,000 trillion rials or around 30% of the total budget for the coming year. Other estimates put the deficits at double this level.

Eliminating the 42,000-rial exchange rate is one of the regime’s strategies to offset the fiscal deficit. Another aim is to raise gasoline prices by eliminating government subsidies. Both initiatives have met significant difficulties. The most immediate result of both proposals is a sharp increase in the cost of living in a country where poverty and misery are already rampant.

For the time being, the gasoline price adjustment plan has been put on hold because the government is concerned about the social consequences of another price spike. The tripling of fuel prices in 2019 sparked widespread protests, pushing the regime to the brink of collapse.

Currency policy changes might have a similar impact. If the regime follows through on its proposal, some economists predict a six- to seven-fold increase in the price of basic products. The government will inject funds into the market to control the price of goods, according to the budget law. But, if history is any guide, such schemes will result in widespread fraud and theft by regime officials, with only a trickle of money reaching the people who need it.