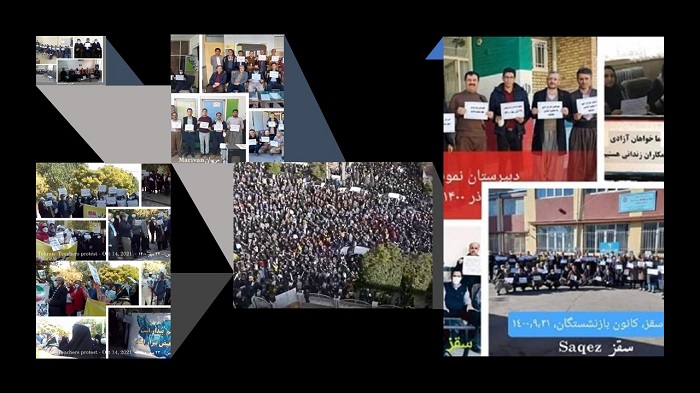 On Tuesday, December 28, 2021, retired teachers and educators protested in at least 20 cities across Iran as part of a state-wide protest.

Outside the mullahs’ parliament in Tehran, gathered

Outside the mullahs’ parliament in Tehran, retired teachers and educators gathered. They demanded that the regime pay attention to their living conditions and hastened the passage of a bill that would make the adjustments to their pensions permanent.

According to the state-run ILNA news agency, retired teachers and educators demanded the implementation of the Ranking Plan, full implementation of the law on national management services, and an increase in their pensions to keep pace with inflation and rising living costs on December 28.

The regime has failed to meet the bill’s obligations

While the administration brags about the bill and its accomplishments, Iranian teachers charge that the regime has failed to meet the bill’s obligations. According to the Iranian Teachers Coordination Council, the bill is deceptive and inappropriate, and the administration has warned that this flawed plan will not be implemented during the current Persian year, which runs from March 2022 to March 2023.

According to the bill, a total of 250 trillion rials will be distributed to about 734,000 teachers across Iran in the coming Persian year, which begins in March 2022. It ignores the tens of thousands of unofficial educators who work because the education ministry refuses to hire them despite passing the test.

After the law was passed, Hossein Arab Assadi, deputy of the Employment Affairs Organization, stated, “There is no funding to implement the law in the current year, and the government has no credit for the year 1400 [March 2021-March 2022].”

Women took part in the protests in large numbers

Women took part in the protests of retired teachers and educators in large numbers and with vigour. “The time has come to destroy you,” one retired woman told the crowd outside the regime’s parliament in Tehran, addressing the regime’s MPs and parliamentary speaker.

“We’ve heard too many hollow promises but seen no justice,” the protesting retirees chanted. “Retirees rise to end discrimination,” “inflation and high prices are calamities for the people,” and “Free the imprisoned teachers!”

On December 26, 2021, retirees protested in several cities, including Ahvaz.

The retirement funds are bankrupt, according to Mohsen Zangeneh, a member of the regime’s parliament. “Most of the country’s retirement funds are insolvent. On December 23, the state-run Tejaratnews.com reported that the new year’s budget would allocate 200 trillion Tomans to these funds to pay retirees’ salaries.