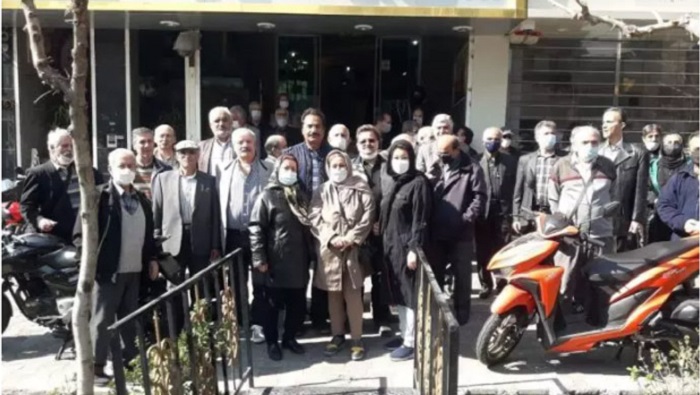 The retirees and Social Security pensioners who are demonstrating are protesting their extremely low incomes and pensions, as well as concerns with their insurance coverage and bad living conditions. They want their pensions increased because the cost of essential food and housing is soaring with no end in sight.

Pensioners and retirees protested their own issues and raised political demands by screaming, “Political prisoners must be released!” at a rally in Tehran, Iran’s capital.

They chanted, “Neither the parliament nor the government cares about the people!”

Protests by Iranians from all walks of life are increasing at an exponential rate. Workers, teachers, and investors attended rallies on February 22 and 24, stating their demands and condemning their continuous economic grievances.

The cabinet of former Iranian regime president Hassan Rouhani includes a quota to equalize pensions in its budget proposal for 2021, which runs counter to the major requests of retirees and if implemented, is totally in the benefit of regime-affiliated retirees who already earn large wages.

The Revolutionary Guards’ (IRGC) Tasnim News Agency published an interview with Shaker Ebrahimi, the regime’s Council of Labor in Kurdistan province, on December 26, 2020. “Those with high salaries benefit from pension equalization, while the impoverished social strata are, unfortunately, forsaken as always,” he remarked.

February 27 – Isfahan, central #Iran
Retired steel workers and miners protesting poor living conditions.
"Neither the parliament, nor the government, none care about the people!" they chant.#IranProtests #اعتراضات_سراسریpic.twitter.com/xCMAbwHcLZ

While a little rise in pensions is insufficient to cover the costs of living for retired government employees, it is not the only injustice they face. The Social Security Fund has also been deprived and looted by regime officials, money that pensioners have paid as social and pensions insurance over their years of work.

Acknowledging the severity of the situation, the state-run Kar-va Kargar daily referred to the Pension Funds crisis as “one of the country’s major crises and challenges,” noting that “the Rural and Nomadic Social Insurance Fund is the only fund out of 20 that is still operational, and the rest of the country’s Pension Funds are in critical condition or on the verge of crisis.”

“When compared to other Funds, the future of the Social Security Administration is the most concerning issue. More than 65 percent of the country’s population, or 42 million people, rely on the Insurance Fund in some way, and as a result, “maintaining this fund is an effort to maintain the country’s social security,” according to the report.

As per a piece published on December 27, 2020, in the state-run Resalat daily, “the government takes no responsibility towards the Social Security Organization, whereas the same organization pays 85 percent of the national fund’s expenditures, and this has deteriorated the living conditions of the pensioners in various dimensions.”

The regime’s Pensions Equalization Plan is clearly a deceptive maneuver intended at quelling pensioner demonstrations and an act motivated by fear of workers and retirees’ outrage. They are now living on the verge of poverty under the mullahs’ rule, coping with difficult pandemic conditions, and if they become impoverished, they, like other segments of Iranian society, will meet a grim future.