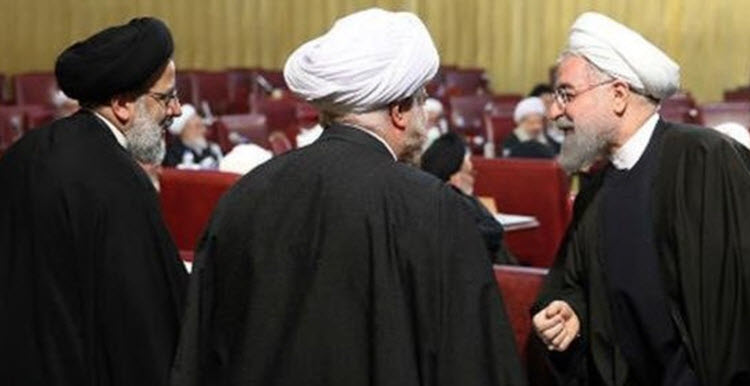 While Ehsan Aminolroaia was being interviewed, questions about the state of Iran’s presidential election arose.

Aminolroaia, a member of the National Council of Resistance of Iran (NCRI), was asked, “In the upcoming election, how will Iran politically respond to what question and how will it resolve the conflict? In 2013, the Iranian regime needed to respond to the issue of the nuclear deal. In year 2005, Iran wanted to spread its influence in Iraq and obtain the nuclear bomb. Therefore, the regime created a Monique ruling apparatus with Ahmadinejad’s base. What is the regime’s Supreme Leader is looking for?”

This election seems to be putting more pressure on the Iranian regime than those in the past.  Previously, the conflict emerged only after the elections, but this time, the issues are surfacing beforehand. The regime is having political problems. The situation has resulted from a series of events that occurred over the past few years, such as uprisings of 2009 and 2010, the Syrian civil war, and international sanctions.

There has also been a break-down of regimes dominated coalition groups (Khamenei’s loyalists), according to Aminolroaia, who believes that this has put the regime in a defensive mode. He said, “Important functions made in this defensive mode were that the regime in 2011 turned to secret talks with the Americans in preparation to withdraw its atomic bomb program. In 2013, Khamenei, again due to fear of the eruption of uprisings, handed executive power to Rouhani. In 2014, they were losing power over Maliki in Iraq, which was the regime’s agent. They retreated from their nuclear program in 2015. During 2016, blocking the collective and organized transfer of the PMOI main regime’s opposition from Iraq failed and checkmated the regime.

Now, the regime wants to find a way to defend itself against an offensive threat, which is spreading. One can call this threat an accumulation of crisis or crises that are intertwined.”

He went on to say that, “The ruling power is disintegrated and its divided components are in a grueling and erosive conflict of undermining or disabling each other. My emphasis is not only on the power struggle between Khamenei and Rouhani factions, but also there are some among Khamenei’s ruling faction contributing to an ever-increasing division and disintegration.”

Aminolroaia highlighted these these 12 important points:

1. Fight for succession of Supreme Leader is underway and its dynamics show instability in the regime.

2. High social readiness for an uprising is the most important factor in the regime’s instability.

3. Level of ever increasing protest and dissatisfaction was at its peak in 2016 compared to six years ago, in 2010.

4. Antagonism of oppressed minorities Arabs, Kurds, Baluch and others against the regime have been intensified and taken an aggressive form.

5. The Iranian regime is deeply involved in three foreign wars in Iraq, Yemen, and especially Syria, and has no way out of this swamp.

6. The Iranian regime’s grand plan to destroy Iran’s Mojahedin Khalq failed. Their successful mass and organizational transfer from Camp Liberty out of Iraq is a guaranty for a progressive and prosperous democratic alternative to Iran’s regime.

7. Regime has lost the principal leverage of its power, the nuclear program, at least for a period of time. This retreat, in some respects, is much worse than Khomeini’s failure in the Iran-Iraq war and drinking the poison challis of ceasefire. Then, Khomeini was able to push aside his internal opposition Montazeri, but Khamenei was unable to eliminate his internal opposition, such as Mousavi and Karroubi.

8. The Comprehensive Atomic Accord has politically failed. This accord must have uplifted the international blockade and improve relations, especially to restore the regime’s economic relations with the West. However, it failed. The international sanctions are in place and acting in other scopes and may even expand. The Atomic Accord was successful and had a chance only with the Obama administration. But the life of that opportunity has ended for the regime

9. Rouhani’s government has failed both politically, as well as economically. He also lost his pillar supporters within the regime, Rafsanjani and Tabassi. This crucial failure is an end to the fake moderation and reform groups and their organization. This faction has constantly had an important role in the survival of the regime, but they would not be able to play such a role anymore.

10. The process of capital accumulation in Iran has reached to a standstill, or at least its minimum. A fundamental cause is capital export. A large portion of which is the costs of the war in Syria to keep Assad in power. There are also other problems, such as deep and chronic recessions, bankruptcy of the banking system, the government’s poverty, and the financial instability that Iran is suffering from.

11. The state of the environment, especially the water shortage, has shape a dangerous crisis that bring social and political tensions along.

12. Today’s gap between social classes with indicators, such as hunger among large portion of society, 10 million people out of work, 20 million living in substandard shelters around the large cities and more, are major sources of tensions and destabilizing factors for Iran’s regime.

Question: Could we say that the main axis around which this complex crisis is formed and has grown is economic collapse?

Answer: Of course, Iran’s long-standing economic downturn is important. But multiple acute crises, which has its political

Character, requires the overthrow of the regime.

Question: We’ll return to the first question again. What is the relevance of this crisis with the regime’s election?

Answer: One and a half years ago, when Khamenei was forced to withdraw his nuclear program, the resistance leader, Mr. Massoud Rajavi, in his message stressed “qualifying weakness and the imbalance of the regime.” Rajavi said, “Now … appeasement, lobbying and claims of reform and moderation for this regime has no effect anymore. We are faced with a qualifiedly weaker enemy who has ingested a challis of poison and it is not an uncovered issue and its effect rapidly will be proven on the ground. As far as the regime is concerned, its ‘retreat’ is just the beginning.”

The twelve above mentioned crises are just a part of this lengthy trend. In other words, the events have evolved to a point for the regime that it cannot continue without having serious consequences.

The regime, before all, needs to close up the power struggle’s gap at the top. The political structure needs a new arrangement.

In regime’s calculation, the bringing of Ebrahim Raisi on board serves this purpose. But his rise means that regime has no solutions for the crisis.

Question: When you say in this election the regime wants to find a way to deal with the crises, they do not display a value to this sham election that is proven to be absolute fake?

Answer: The reason for the election to be a sham and fake means that this election does not have all the terms, conditions and known standard norms of other elections. We are facing a phenomenon that in its outlook has shape of an election, but in reality, is a form of power sharing at the top of one of the regime’s factions.  This is one of the most important policy areas in the Iranian regime.

Answer: Their fighting over their share of power. But if we follow it deeper to the conflict’s roots; politically (taking the power equation into consideration), Khamenei’s critical need is for a single handed regime;

– In terms of classes, conflict between a medieval head with a bourgeois body,

– From a legal point, conflict of the presidency and the supreme leader (Khamenei),

– And from a social point, conflict of a society that is strongly dissatisfied and want to change the religious dictatorship.

Question: We know that these two persons, both Rouhani and Raisi, have been selected by Khamenei. However, at the end, Khamenei prefers which one?

These are his maximum and minimum demands. But who is going to come out of ballot box depends on the balance of forces inside and outside of the regime, in other words, domestic, regional and international factors.