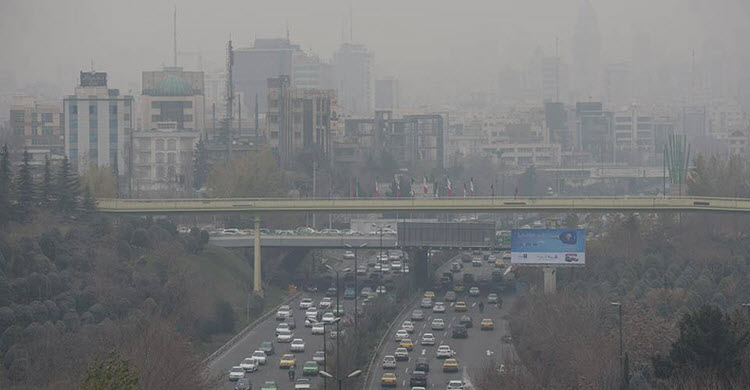 Exhaust fumes from millions of vehicles that travel around Tehran’s roads are responsible for around 80 percent of the pollution in the city. Now, as winter progresses, the emissions fail to rise above the cold air making the situation even worse.

According to Phys.org, schools were closed on Monday and tourists were apologised to because of the extremely high levels of air pollution. It said that a “blanket of brown-white smog descended on the capital Tehran on Sunday, blocking views of the mountains that line its northern edge and forcing many of its 14 million residents to retreat indoors or don face masks in the street”.

On the Air Quality Index of deadly airborne particles, Tehran reached 156. It reached 167 in tourist hotspot Isfahan. Anything over 150 is considered an “unhealthy” level for the general public.

On Monday and Tuesday, day care centres and primary schools were shut, and tight restrictions were placed on traffic.

“Ambulances were deployed to wait in the busiest and dirtiest areas amid warnings that children, the elderly and those with existing health conditions were at particular risk.”

Zeynab Nazari, a first-year sociology student, said: “Since no one does anything, every year the problem gets worse. The government should block old cars. We must improve public transport.”

As Zeynab Nazari pointed out, the problem is critical because Tehran has some of the worst pollution in the world. Cooler autumn temperatures cause “temperature inversion” – an effect that “creates a layer of warm air above the city that traps pollution from some 10 million cars and motorbikes”.

The current smog cloud effecting the city will probably be there until Wednesday when winds are expected to move the stagnant air.

The mayor of Tehran, Mohammad Bagher Ghalibaf, took the metro to work Sunday in an effort to encourage people to make the most of public transport. Although there are approximately 100 stations, the mayor said that the metro is in dire need of more funding from the central government. As a result, millions of people have no choice but to rely on cars.

The article also mentions that the issue of pollution has become a game of “political football” in the past few years as conservatives and reformists blame each other for the problem. Hardliners say that Massoumeh Ebtekar, the reformist vice-president Massoumeh Ebtekar, is not doing enough. He says, however, that several measures are in place to reduce pollution from factories and to provide cleaner petrol.

It has been said that around 70 percent of deaths in the city are due to the pollution issue.