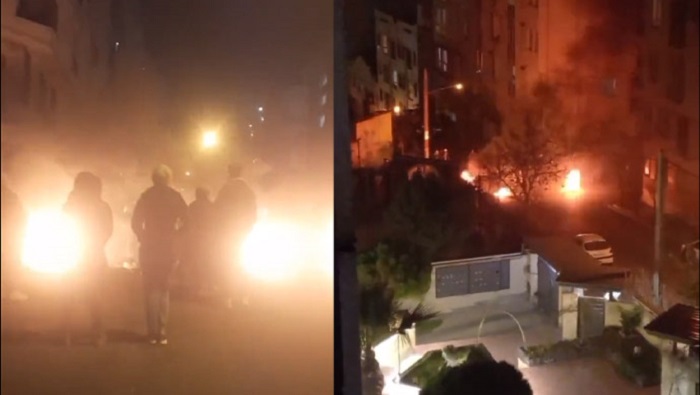 After a night of intense protests in several cities, Iran’s nationwide uprising reached its 97th day on Tuesday. This is the second day of a three-day campaign of major strikes and protests across the country.

Workers from the oil terminal in Qeshm Islamd, as well as workers and personnel from the Parand Industrial City Transformers Company, joined this new campaign. Residents of Tehran’s Rasul Akram Hospital and students at Iran University of Medical Sciences, as well as students at Isfahan University’s Economics School, went on strike and boycotted classes in response to the regime’s escalating crackdown measures.

December 20 – Tehran, #Iran
Residents and physicians of Tehran’s Rasul Akram Hospital on strike for second day
"Students will die but won't give in to disgrace!" protesters are chanting#IranRevolution2022#مرگ_بر_ستمگر_چه_شاه_باشه_چه_رهبرpic.twitter.com/IQ2PCbgvRN

Protests in Iran have now spread to at least 280 cities. According to sources from the Iranian opposition People’s Mojahedin of Iran (PMOI/MEK), the regime’s forces have killed over 750 people and arrested over 30,000. The MEK has released the names of 596 protesters who were killed.

All shops in Sanandaj’s Shahrak-e Sanati (industrial village) were closed. Residents and physicians at Rasul-e Akram hospital in Tehran went on strike and held protest rallies. Students also went on strike in Saqqez and Rasht, refusing to go to class in solidarity with nationwide strikes and protests.

A large rally was held in Gorgan in memory of Ayda Rostami, a civilian who was killed by security forces seven days ago. The regime sent plainclothes agents to the scene to control the situation, but the protesters persisted.

December 20 – Gorgan, northeast #Iran
Locals gathered to mark the 7th day of Dr. Ayda Rostami's murder by the regime's oppressive security forces. Many plainclothes agents have been dispatched to the site.#IranRevolution2022#آیدا_رستمی pic.twitter.com/0PLlfKna3z

Protest rallies in Golshahr chanted “Death to Khamenei!” and “Death to the dictator!” in Karaj. Protesters also chanted anti-regime slogans and declared that they will continue their uprising even if the regime continues to hang political prisoners.

Protests have been reported in several other cities, though locals are having difficulty sending their reports due to internet outages caused by the regime. Protesters in Sanandaj blocked roads and chanted, “Death to the dictator!”

People gathered in Karaj, west of Tehran, in the Gohardasht district, and chanted, “Death to the dictator!” Protesters held a large rally in Golshahr, chanting anti-regime slogans. They also remembered Majid Reza Rahnavard, a protester who was executed earlier this month by the regime.

Rasht witnessed a large-scale protest. People took to the streets, chanting anti-regime slogans and expressing their determination to continue their revolution. “We swear on the blood of our compatriots, we will fight to the end!” chanted the protesters.

Iranian opposition President-elect Maryam Rajavi of the National Council of Resistance of Iran (NCRI), praised the “courageous women and youths in Iran rose up” on Monday, calling for the overthrow of the mullahs’ regime and the release of political prisoners.

Courageous women and youths in #Iran rose up tonight with chants of “Death to Khamenei,” “We will stand to the end,” and “Free all political prisoners.” In various parts of Tehran, and near Khamenei’s residence, they shook the system to the core. #IranRevolution shall win!