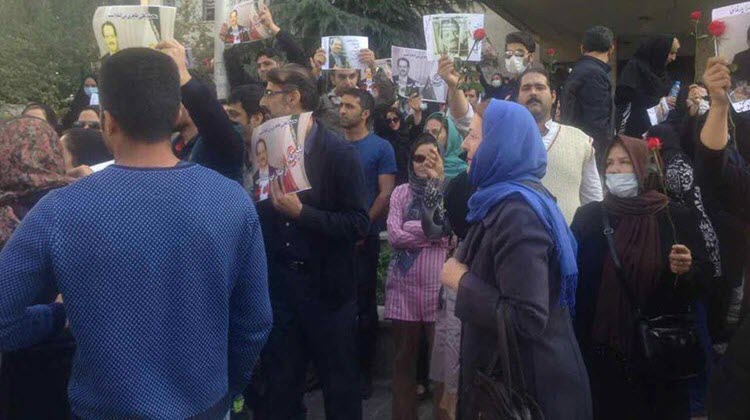 Law enforcement agents beat demonstrators and arrested 15 people and took them to an unknown location said the National Council of Resistance of Iran (NCRI). A sixteen year old boy was arrested and his mother was badly injured while trying to prevent her son’s arrest.

The crowd was peacefully standing in front of a hospital in Tehran in support of political prisoner Mohammad Ali Taheri who is in a coma following a hunger strike.

The evening before this, security forces, in an attempt to disperse the crowd, threw tear gas poisoning women and children.

On 4th May 2011 Mohammad Ali Taheri was arrested and subsequently sentenced to five years in jail, a huge fine and 74 lashes. His charge was ‘blasphemy’ and ‘illegal intervention in medical affairs and treatment of patients’. He should already have been released, but the regime has filed a new lawsuit to extend his detention.

The NCRI has further reported that supporters of Mohammad Ali Taheri continued to demonstrate on Monday 24th August. This resulted in further clashes with the repressive security forces who again tried to disperse the demonstrators. Some were arrested and beaten so badly that they needed to be transferred to medicals centres immediately.

Eyewitnesses say that there were more than 3,000 people demonstrating outside the hospital. They gathered peacefully and silently in front of the hospital, holding flowers. They planned to leave after visiting hours but were suddenly attacked by the Security Forces’ special unit. They brutally beat the demonstrators, especially women. The NCRI say that they “had no mercy on anyone, young or old, men or women.”

Recently Amnesty International claimed to be unaware of Mohammad Ali Taheri’s. They have called on the Iranian regime to provide more information about his situation and whereabouts and have urged for his immediate release.