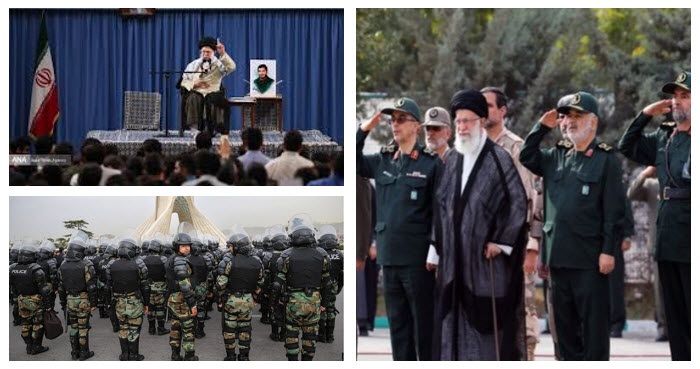 The Iranian regime’s Supreme Leader Ali Khamenei stated on January 25, 2016, emphasized that if these protests are  not stopped the “enemy will enter the country” and “we will have to fight and stop them here in Kermanshah, Hamedan, and other provinces!”

Of course, what Khamenei didn’t say is that the “enemy” is already inside Iran. The Iranian people are Khamenei’s main adversary. This same adversary has launched a new round of protests, which began on May 8 and have spread to numerous cities and provinces. The ruling regime’s situation has deteriorated to the point where regime officials are expressing concern.

On May 13, former Majlis (parliament) speaker Gholam-Ali Haddad-Adel said, “[The situation] is completely out of control.” “We are seeing protests in cities across the country that cannot be ignored,” Adel, a member of Khamenei’s inner circle, said.

“We could see a negative trend of events similar to what we saw in November 2019!” According to a May 18 piece in the state-run Jahan-e Sanat daily, the nationwide uprising in November 2019 spread to nearly 200 cities across the country.

There is growing concern about not only the current state of affairs but also what the future may hold. On May 13, Majlis member Ghasem Saedi said, “There could be [protests] far more dangerous than the [uprisings] witnessed in 2017 and 2019,” adding that an enemy is “waiting to take advantage of such circumstances.”

On May 13, a representative of Khamenei stated that certain parties are attempting to “relaunch the events of November 2019 and 2009 [nationwide protests] in the streets and alleys.”

These early warning signs are being raised as social unrest in Iran grows more widespread and overcomes the regime’s repressive apparatus. When the mullahs’ regime sends a large number of oppressive forces to Khuzestan province in southwest Iran, protests break out across Khorasan province in the east and northeast.

Protests have gradually spread to Ardabil in the northwest and Sistan and Baluchistan provinces in the southeast, as events have shown. People have taken to the streets in anti-regime protests in the provinces of Lorestan, Chaharmahal & Bakhtiari, and Kohgiluyeh & Boyer Ahmad in the west.

According to a May 18 piece in the state-run Jahan-e Sanat daily, “in the capital, we are seeing an uneasy atmosphere and early signs of protests.”

Popular protests are showing signs of spreading across the country, potentially leading to entire cities revolting and the people overthrowing the regime. The prospect of victory is closer than ever with the Resistance Units active everywhere.