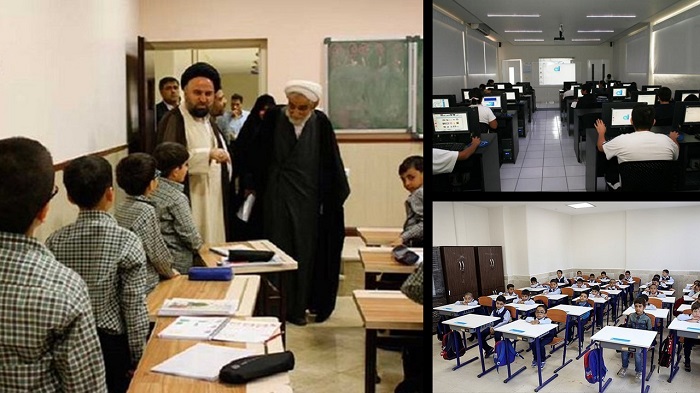 For 43 years, a state-backed mafia has ruled Iran and its ministries, offices, institutions, and even the commercial and non-profit sectors. Officials do not consider schools, especially non-profit ones, as a method of improving public understanding and educating students.

Instead, they see these institutions as a means of stuffing their own wallets with other people’s money. As a result, such schools are viewed as markets and trade zones rather than places where students can receive “excellent education.” These high-tuition ‘non-profit’ centres have created a slew of problems for the country’s educational system.

Furthermore, due to financial constraints, almost 80% of society’s youngsters have been dropped out. In the best-case scenario, such families enrol their children in public schools, neglecting the benefits of “excellent education.” Despite the government’s deceptive claims about free education, even public and state-run schools require families to pay tuition.

Families living below the absolute poverty line, often known as the ‘existence line,’ prefer to feed their children rather than send them to school in such circumstances.

#43YearsOfCorruption
The ayatollahs ruling #Iran look at non-profit schools as an instrument to line their pockets with people's money. Therefore, such schools are considered markets and trade zones rather than a place for 'excellent education.'https://t.co/mjlaFhTYO9

In contrast to their ostensibly religious declarations, the authorities’ primary goal is to increase profits by any means necessary. Thousands of public and non-profit schools, colleges, and universities have been built and sponsored by the ayatollahs, amid the reality that their antiquated explanations are vastly different from those of such institutions. And, even though the constitution calls for it, Iranian officials refuse to give free education.

“Economic privileges are the main purpose of these schools,” emphasized Aftab-e Yazd daily in its March 3 edition under the title of ‘The disaster of non-profit schools for education.’ “Non-profit schools compete for students, which confuses parents… While founders and schools try to gain huge revenues through registering more students, many of these schools are ineligible.”

Yet, school administrators employ every trick in the book to cut costs and boost profits. For example, instead of hiring professional teachers, they hire undergraduate students. “Many students succumb to school demands and ignore their basic rights and adequate salaries due to a lack of job and dire economic conditions,” Aftab-e Yazd explained.

“The percentage of non-profit schools, which use [students] is very high. This is because of financial issues that have been aggravated, particularly due to worsening economic conditions and dwindling schools’ revenues,” says education expert Mohammad Reza Niknejad. “Therefore, the root of this issue mainly goes back to the economic situation.”

Iran’s observers claim that the situation of teachers in non-profit schools is “catastrophic.” “These student teachers have been deprived of their fundamental rights and are subjected to oppressive behaviour. They cannot even complain and will lose their careers if they do.”

“They argue that non-profit school teachers should be paid at least $94 per hour, which is the national minimum wage for teachers. “However, schools make 15-day arrangements, and teachers typically get less than $94,” a teacher told Shahrvand Online on January 2. “They easily say anyone who complains should go to the Education Ministry.”