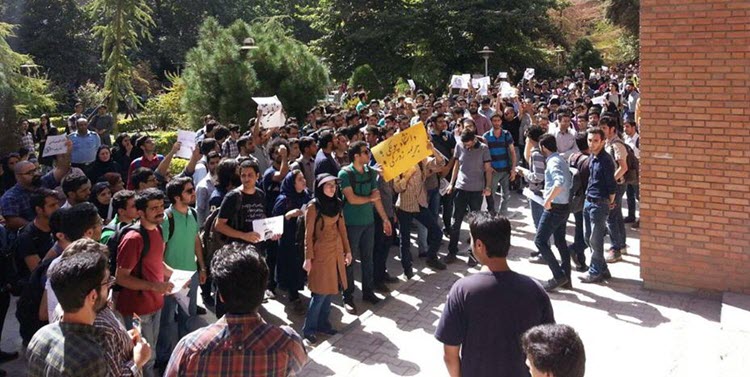 This past week has seen many protests regarding Education issues, as students protest a proposed fine of 5 million tomans, and retired staff of Education Ministry stage rallies protesting low wages and miserable living conditions.

Students criticize of the proposed plan to fine students for enrollment for 5th semester of graduate courses. The plan would make attendance conditional upon paying a 5 million tomans fine (~ 1600 USD). Students must also pay college expenses such as accommodation costs and self-serve restaurants.

The plan is in violation of regulations adopted by the Ministry of Science of the regime.

Rallying students hold banners reading: “Students would rather die than to accept  humiliation”, and “Student is aware, the voice of justice can be heard”, as well as “Is here a university or barracks!”.  Further sentiments are displayed, such as, “We are better students, we we are more deprived than everyone”, and “Sharif University or Sharif business firm?”, as well as, ”We do not give money by force” and “University is not a source of income”.

According to the NCRI, “Sharif University students declared in a statement that not only Rouhani’s promises to students and about university has not been fulfilled after three years, but continually additional unjust expenses and limiting regulations have been imposed on them.”

Also occurring on the morning of September 27, according to an article published by the NCRI,  thousands of the retired personnel of the Education Ministry staged protest rallies in Tehran, Kermanshah, Isfahan, Zanjan, Kerman, Shiraz, Tabriz, Aligoodarz, Mashhad, Rasht, Abhar, Ilam, Yazd, Gorgan, Hamedan, Behbahan, Birjand, Bojnourd, Sanandaj, Nahavand, as well as in some cities in the northern Gilan Province.

Outside the Iranian regime’s parliament (Majlis),protestors are carrying placards which read, “Dignity, jobs, are our inalienable rights”, and “Poverty line = 3million, our salaries = 1million”, as well as “The retired = The forgotten”, and, “Respect for the retired = attending to their living conditions.”

Security forces surrounded the protesters and blocked all roads leading to the area to prevent people from joining them.

“While the Education Ministry staff and retired personnel are living in difficult circumstances, the country’s wealth and revenues are spent on anti-patriotic nuclear, military, security, export of terrorism and suppressive projects or are plundered by the regime’s officials and deposited in their foreign bank accounts,” writes the NCRI, adding, “So long as the inhuman and anti-Iranian religious dictatorship rules in Iran, poverty, unemployment, and inflation are aggravated day by day. The Iranian Resistance expresses its solidarity with the protesters, and calls on Iran’s nation and youths in particular to support them.”