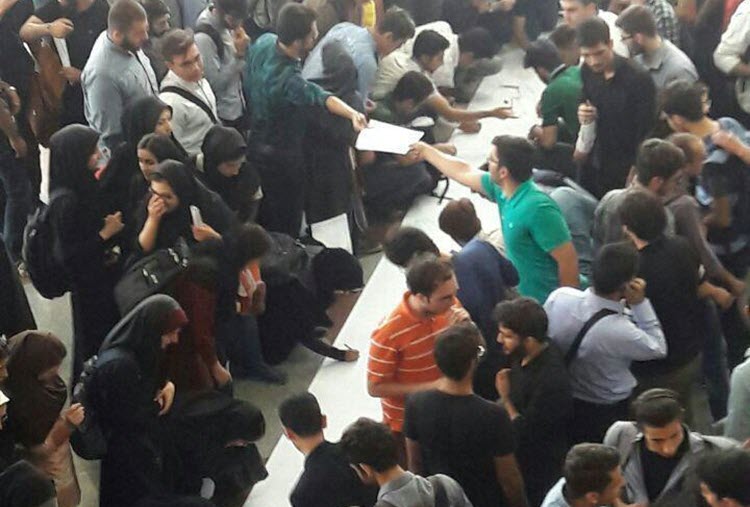 Students from across Iran staged protests at their universities this weekend, citing increasing governmental interference in their studies, rising fees and broken promises on employment prospects after graduation.

These students demonstrated with a hunger strike against poor living conditions in their dormitories, unjust fees levied upon them for their studies and the low quality of food on campus despite rising costs.

The demonstrators referred to this as “extortion money” and refused to pay.

These students held their protest in the university’s conference hall, delivering impassioned speeches in front of the University President.

The students gathered inside the university’s Central Building to protest the poor internet service which was impacting on their studies.

Not even one Regime Agent from the Educational Assistance Department has responded to the students.

Students protested outside the Oil Ministry building in Tehran over broken promises from the regime regarding employment opportunities post-graduation. They first raised the issue in August but the Oil Ministry refused to answer their questions.

All  the above protests took place on Saturday, October 1, but they follow on from similar protests in late September.

Students at Sharif University of Technology held a three-day protest and hunger strike from September 24-27 outside the building of the university president.

They were protesting the rise in student fees, a plan in violation of the Regime’s own Ministry of Science, chanting “Students would rather die than to accept humiliation” and “University education should be free”.

They confronted Ministry of Intelligence agents who attempted to end the protest.

Similar protests occurred that weekend at the University of Amirkabir, Melli (Beheshti), Tarbiat Modarres of Tehran, Esfahan University of Technology, Razi in Kermanshah, and Zanjan University.