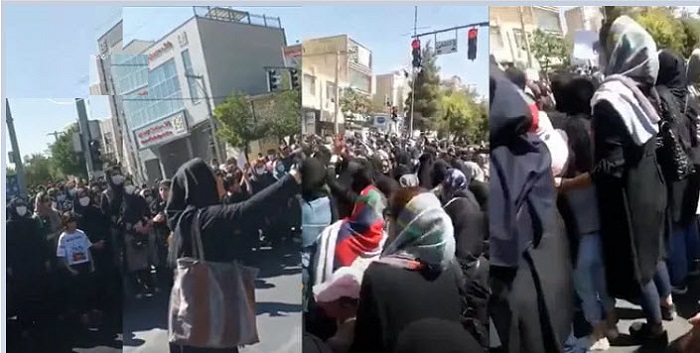 The people of Shahr-e Kord took to the streets, On Tuesday, August 16, 2022, to protest the city’s lack of water for more than a week during the summer heat. People do not even have access to drinking water. The courageous women of Shahr-e Kord were at the forefront of the protests.

The people marched to the Governorate’s office, chanting “death to Raisi” and “death to incompetent officials,” “We are thirsty,” they exclaimed.”We can only earn our rights by taking to the streets,” the people chanted.

Mrs. Maryam Rajavi, President-elect of the National Council of Resistance of Iran (NCRI), praised the people and courageous women of Shahr-e Kord. “The brave people, esp. women, of Shahr-e Kord took to the streets to protest water cut-offs. Chanting ‘Death to Raisi’ & ‘we earn our rights only by taking to the streets,’ they confronted the Iran regime’s repressive forces. I urge all compatriots to support them.”

The corrupt regime’s destructive policies, embezzlement, and refusal to address the people’s basic needs have pushed Iranian society to the brink of collapse. People are fed up with the state of the economy, low wages and pensions, rising inflation, and skyrocketing prices. The majority of people struggle to make ends meet.

Bread, milk, dairy products, eggs, poultry, and cooking oil are just a few of the basic food staples that have seen price increases in recent months. Power and water outages aggravate the situation.

Iran’s people see a regime change and the overthrow of the mullahs as their only way out of this situation.