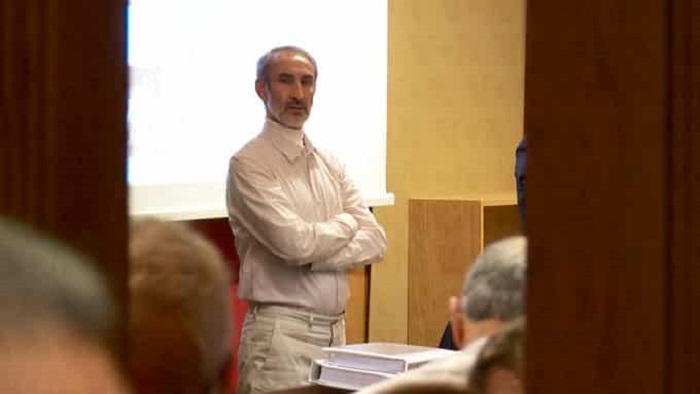 Hamid Noury’s trial entered its 80th session on Thursday, following his arrest in Sweden in 2019. Noury, a prison official in Iran, was apprehended for his role in the massacre of 30,000 political prisoners mostly members of the People’s Mojahedin of Iran (PMOI/MEK).

“The People’s Mojahedin is not individuals; they are an ideology and a world outlook,” Khomeini’s designated and later sacked heir, the late Ayatollah Hossein Ali Montazeri, told members of the Death Commission on August 14, 1988. They have logic. It takes the right logic to answer the wrong logic. With killings, you can’t fix what’s wrong; you can only spread it.”

Alireza Akbari Sepehr, a former political prisoner from the Organization of Struggle for the Emancipation of the Working Class (Paykar), shared his painful memories of his time in prison during Thursday’s session. Sepehr and his pregnant wife were arrested in 1982 in southeast Iran, months after the organization he supported was dismantled.

Sepehr’s wife gave birth to their son in a solitary cell a few months later. On Thursday, Akbari Sepehr testified that he had three encounters with Hamid Noury, also known as Abbasi, at the notorious Evin prison, where Abbasi worked as an “assistant prosecutor.”

Akbari Sepehr and hundreds of MEK members were transferred to Gohardasht prison in 1987, following a hunger strike by political prisoners in Evin prison.

The so-called “Death tunnel” was the subject of Akbari’s testimony. The guards began savagely beating prisoners who had to pass through a corridor surrounded by guards as soon as they arrived. “After passing through the tunnel, MEK detainees and I were taken to a cell, where the guards stripped us naked and blindfolded us, then beat us,” he told the court.

Days before the 1988 massacre, the guards took away the TV set under the pretext of repairing it, and they also stopped bringing newspapers, according to Akbari Sepehr. All meetings were cancelled, and prisoners were informed that the “Death Commission” had arrived at the prison via morse codes.

Soon after the regime’s then-supreme leader, Ruhollah Khomeini, issued a fatwa ordering the execution of political prisoners, primarily MEK members, the so-called “Death Commissions” were established. Only MEK members who refused to denounce the organization and its democratic ideals were identified.

Marxist detainees like Akbari Sepehr were forced to pray and give an interview in which they defended their previous positions. “When I realized, the executions were going to happen, I agreed to pray and do the interview,” he said.

Sepehr confirmed Noury’s involvement in the 1988 massacre and testified under oath that Hamid Noury is the infamous Hamid Abbasi, the deputy warden at Gohardasht prison.