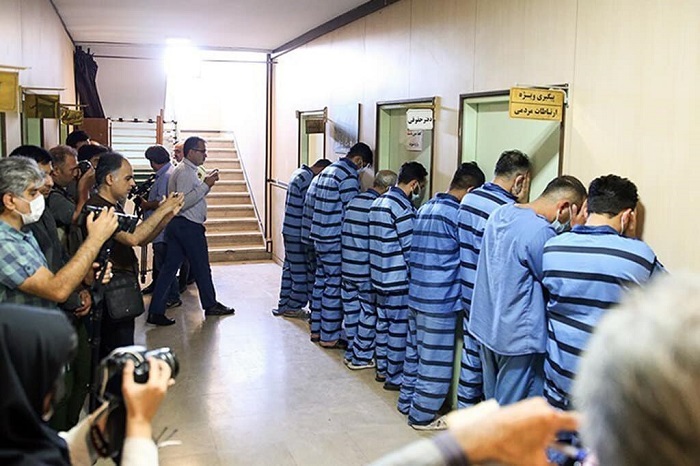 “Burglars cut through the wall of a branch of Bank Meli (Persian for National Bank) from a neighbouring building in Tehran,” Iran’s state television reported on Monday.

These looters broke into the bank, had 14 hours to easily dismantle CCTV cameras and steal their memory cards, and made a lot of noise by cutting the safe boxes and stealing people’s belongings with hand milling machines. Bank alarms went off, numerous calls to the regime’s “security” apparatus went unanswered, and not a single police officer arrived on the scene. Hundreds of Iranians have lost their life savings as a result.

“Because the branch lacked a security guard, the bank only learned about the theft four days later. The thieves took about 14 hours to take the money,” Hassan Mounesan, a member of Bank Meli’s Board of Directors, said on June 10.

This branch has “seven layers of security and an automated alarm system,” according to Mounesan. Despite this, he avoided the question of why the bank was so easy to break into.

For a long time, Iran’s ruling theocracy justified its atrocities by boasting about “ensuring the country’s security.” The regime considers killing innocent protesters on the streets, arresting those who chant against regime officials, and organizing attacks against women to be “security measures.”

How did they fail to apprehend a gang of bandits after 14 hours when it takes state security forces several minutes to arrive at the scene of a protest and open fire on unarmed civilians? There are many theories about regime officials’ involvement in the robbery, and given the regime’s history of institutionalized corruption and plundering people’s wealth, the latter is highly likely.

Thousands of Iranians lost their savings in government-backed credit institutions like Caspian and Thamen-Ol-Ameh in 2018. People were duped into trusting these institutions because they claimed to return people’s money with a 25% interest rate. Thousands of people’s lives were ruined as these institutions gradually stopped allowing withdrawals, then stopped paying interest, and finally closed their doors for good.

People staged week-long demonstrations to demand their rights. The demonstrations and slogans of those who were duped were later attributed to Iran’s first major uprising in 2018, which shook the regime’s foundations.

Following the heist on Monday, victims of the robbery gathered at Bank-e Meli’s main branch to demand their rights. Officials from the regime initially tried to dismiss the crowd, claiming that because the safe boxes were not insured, they could not be held liable for the people’s losses.

Fearing public retaliation and a new round of protests in Iran’s volatile society, the regime announced that the thieves would be prosecuted. Finally, on June 9, the state police announced that all of the robbers had been apprehended and the fortunes had been confiscated.

Iran’s state media and police made much of the arrests, boasting about a joint operation with Interpol to apprehend several thieves who had managed to flee the country.

“We have reclaimed the majority of the wealth of the people.” Now it’s up to them to figure out how much they’ve lost and tell us,” Tehran Police Chief Hossain Ashtari said in an interview with state television on June 9.

Holding more than 10,000 euros worth of securities, according to the regime’s criminal code, constitutes currency smuggling, which is punishable under the regime’s laws. To put it another way, people who had their life savings in the bank can now only get 10,000 euros back, while the regime keeps the rest. Furthermore, the regime claimed to have apprehended all criminals. So why have only 90% of people’s belongings been restored? What happens to the rest of the group?

Expecting the regime’s FRAJA to restore people’s funds is akin to expecting an arsonist to extinguish the fire.  FRAJA, officially abbreviated as NAJA, is a corrupted organization.

In 2015, it was revealed that NAJA and its then-commander Ahmadi-Moghaddam had embezzled billions of dollars amid the regime’s infighting. The Cooperative Foundation of the State Security Forces (NAJA), according to an exclusive report by the Iranian Resistance in 2020, “today is one of Iran’s largest holding companies.”

Tehran’s beleaguered regime requires additional funds to fund its terrorism and warmongering policies. It plunders people’s wealth, whether covertly or overtly. The regime’s plan to use every penny it finds to prolong its life includes devouring oil rigs, monopolizing entire industries, selling soil and trees, and the latest bank robbery that raises so many red flags.