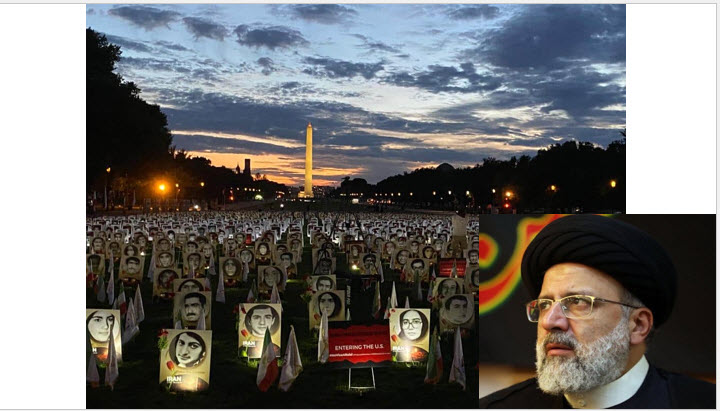 Tehran announced on August 2 that President Ebrahim Raisi would attend the UN General Assembly session in September. “The preliminary planning for the President’s attendance at the UN General Assembly session has been completed,” Ali Bahadori Jahromi said at a press conference. Following the announcement, Iranians launched the “No Visa for Raisi” campaign, urging the United States to deny Raisi a visa. They believed Raisi was a key perpetrator of mass executions of political prisoners in 1988.

Based on a fatwa issued by the regime’s founder, Ruhollah Khomeini, “Death Commissions” were formed at the time to carry out the execution of 30,000 political prisoners, the majority of whom were affiliated with the Iranian opposition, the People’s Mojahedin of Iran (PMOI/MEK).

Several survivors and eyewitnesses identified Raisi as a member of Tehran’s four-member death commission. They urged the international community, particularly the United States administration, to refrain from hosting the mass murderer president and his delegation because of their crimes against humanity.

The Iranian American community believes that the presence of a mass murderer tarnishes the United Nations’ reputation as the most powerful advocate for human rights. Raisi not only led thousands of political prisoners to the gallows in 1988, but his hands are stained with the blood of thousands of inmates arbitrarily executed during his tenure as Chief Justice and President.

Raisi led the #1988Massacre of 30000 political prisoners. His regime just threatened to strike NYC with missiles. @StateDept should NOT grant him a visa #NoVisa4Raisi pic.twitter.com/dfUTaOOchz

He was also actively involved in the November 2019 lethal crackdown on protesters, which left over 1,500 people dead on the streets.

Several former US officials, current representatives, and senators spoke out against granting Raisi a visa. On the same day, US Senators Tom Cotton and six others demanded that President Biden deny Raisi and his delegation a visa to attend the United Nations General Assembly in New York City in September.

“Raisi’s involvement in mass murder, combined with the Iranian regime’s campaign to assassinate U.S. officials on American soil, makes allowing Raisi and his henchmen to enter our country an inexcusable threat to national security,” Senators wrote.

Instead of allowing Raisi into the U.S., we should be investigating him for crimes against humanity! #NoVisa4Raisi #FreeIran2022 https://t.co/xyFbohuy1C pic.twitter.com/7m6qZqrRE1

Following the DOJ revelation, the Federal Bureau of Intelligence placed IRGC member Shahram Poursafi on its wanted list for charges related to the murder-for-hire plot. Poursafi had offered $300,000 on behalf of the IRGC for the assassination of Ambassador Bolton, as well as another $1 million for the assassination of a second target, who has now been confirmed to be former US Secretary of State Mike Pompeo.

A day later, Ambassador Bolton called the Iranian regime’s plot “unprecedented” and an “act of war.” “The goal here is to kill Americans on American soil, as well as former government officials,” Bolton explained to Fox News. “This is a broad threat to private American citizens on American soil, and I believe it is largely unprecedented.” It’s an act of war, and it tells you everything you need to know about the Iranian government.”

Similarly, the IRGC’s second target, Secretary of State Mike Pompeo, has asked the White House to deny Raisi a visa to enter the United States and attend the United Nations General Assembly, citing Tehran’s active plots to assassinate him and other top US officials. “The Biden administration is setting a dangerous precedent by permitting Iranian president Ebrahim Raisi into America just weeks after the hardline regime threatened to ‘turn New York into ruins and hell’ with an intercontinental missile strike,” the Washington Free Beacon quoted Pompeo as saying.

Former US Ambassador to the United Nations Nikki Haley also criticized granting Raisi a visa. “The Biden administration should never allow Raisi to set foot in our country,” she said. “He should not be permitted to tarnish American soil.”