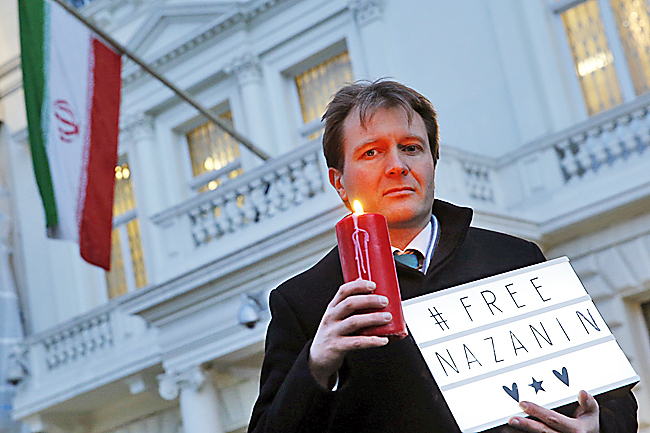 by Staff writer, SF
A British charity worker wrongfully imprisoned in Iran is now facing new trumped-up charges of “spreading propaganda” against the state, her husband has said.
Richard Ratcliffe sent a statement to Al Jazeera on Monday explaining that his wife, Nazanin Zaghari-Ratcliffe, denied this charge, as she had done with the other charges, when she appeared in court on Saturday.

Zaghari-Ratcliffe, who worked for the Thompson Reuters Foundation, is already serving five years in the notorious Evin Prison on bogus charges of attempting to overthrow the government in 2016. The sentence, which included a lengthy stint in solitary confinement, has left her with physical and mental health problems.

The Londoner and her family say that this is merely a ploy by Iran to delay her release on parole, which has been approved by the head of the prison., and imprison her for another 16 years.
The #FreeNazanin campaign released a statement that Zaghari-Ratcliffe was forced to appear in court without her lawyer after the judge barred him and ordered her to find a new one in just 10 days.
In court, she was shown a file of her press coverage whilst in prison and, whilst she was not able to read it in detail, Zaghari-Ratcliffe understood that she was facing eerily similar charges that were being used to justify her continued imprisonment.
Whilst in court, Zaghari-Ratcliffe appealed to Judge Abolghassem Salavati for clemency, noting that she had never tried to overthrow the government.

She said, according to the press statement: “I do think the government here needs to reform, but I have never been involved in any attempts to change the regime.”
She told the judge that she wanted to see her daughter Gabriella, whom she had taken to visit family in Iran when she was arrested. Gabriella was only one when she was separated from her mother in 2016 and will turn four next month.
Zaghari-Ratcliffe, 39, also said that she wanted to have another baby before it is too late.
She said: ‘There is something called clemency. Give me that for the sake of my baby. She hasn’t seen her father for over two years now. I would ask the judge today to close this new case and give me parole, so that I can go home and have another baby and have a normal life.’
However, Ratcliffe said that his wife was told to expect conviction by the judge.
After her court appearance, Zaghari-Ratcliffe was able to talk to her family and meet with the British Ambassador to Iran Robert Macaire.
This marks the first time that Zaghari-Ratcliffe was able to contact the embassy during her imprisonment and she pleaded with Macaire to encourage Foreign Secretary Boris Johnson to visit her and to file a formal diplomatic note protesting against the new charge against her.