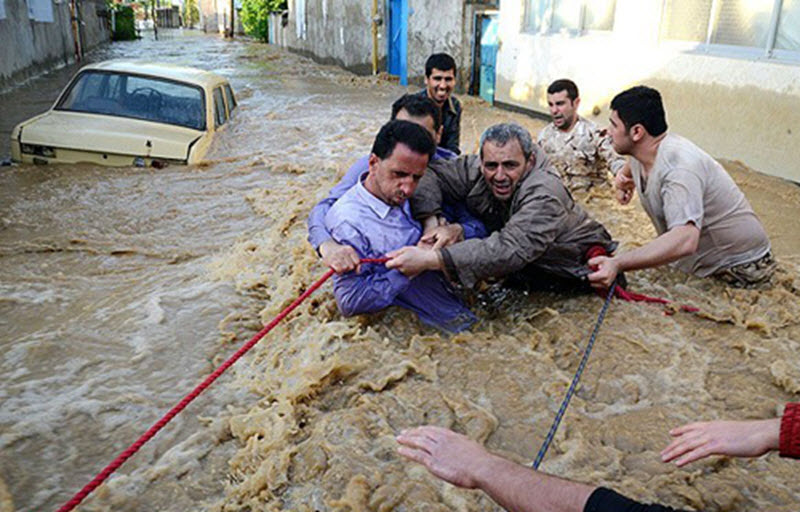 In northern Iran, near the Caspian Sea, lies the city of Aq Qala whose population is more than 35,000. It was one of the worst flood-stricken areas in the country. To date, no tangible help has reached the residents of Aq Qala city.

During the past few days, regime officials have made promises regarding compensation for losses and for preventing further damage from the flood. Even those with no insurance for their cars, agriculture, or livestock are promised compensation.

However, the wording of these promises is quite ambiguous. For instance, Iran’s President Hassan Rouhani said that the “government would compensate as much as it can” — but, what does “it can” mean?

The regime makes these empty promises because it is worried about angering the people. A representative of the Supreme Leader who was touring flood ravaged cities said, “Where ever we went, we heard people cursing us.”

Since December 2017 the people have been voicing their anger over government corruption, repression, and tyranny, and they are no longer buying empty promises and gestures. They have begun to act on their own to alleviate the suffering caused by the flood.

Videos are being posted online that show how the people are cooperating, like the one posted by a resident of Aq Qala on the government-run Asr-e Iran website on March 27th. “People from 13 years of age to 60 are working day and night without sleep to salvage whatever is left of this devastating flood,” according to the resident who shot the video. “We tried our best to create a floodgate solely on our own with no help from the government.” Another resident said, “We rented an excavator to erect a temporary floodgate. We paid out of our own pockets, nothing came from the government.”

Members of Iran’s parliament, the Majlis, are concerned that there has been no tangible action to help the affected people. Iranian MP Nabi Hezar-Jeribi said, “I say that nothing would come out of these sessions. People are besieged by the flood. They don’t even know what has happened to them yet.”

The PMOI reports that the people have formed local councils to confront the damage from the flooding and to help their neighbors. These local councils have taken the regime by surprise and frightened its officials. Local councils tend to develop into larger organized movements, and are viewed as a threat to a regime that is already on shaky ground.

It is believed that much of the flood devastation stems from projects carried out by the Islamic Revolutionary Guard, IRGC. The IRGC cares only about increasing their profits, and they don’t assess or analyze the effect of these projects on the environment. An example of this is the road that the IRGC constructed on an old riverbed in the southern city of Shiraz. The riverbed was a natural flood path, but as there had been no floods in that area for years, the IRGC decided to construct a highway there. On March 25th more than 200 commuters became victims of flooding on this highway.

Former IRGC commander, Shamkhani, in an attempt to divert blame said, “Anybody who has constructed roads or buildings on the dry riverbed in Shiraz is considered guilty.” He added, “It seems that the road was constructed partly by private sectors and partly by [Rouhani’s] government.”

Asr-e Iran website published a story on March 27th that read in part, “Previously, the railroad connecting Tehran to Gorgan, another northern city, passed through Torkaman harbor. But in recent years another railroad track was constructed. The new track connects the Torkaman harbor to Inche-boron business border. The flood ran passed the dam, but due to the land topography and the existing riverbeds, the flood should have been diverted from its path and finally run to the Caspian Sea, instead it hits a great wall which was the new railroad track and changes its path to the city of Aq Qala drowning the entire city.”

What Asr-e Iran website neglected to say was that the IRGC was behind the construction of the new railroad. It did report, however, that the local councils acted quickly to remedy the problem. “Without the knowledge of the governor, local people got to work at 5 o’clock in the morning and brought an excavator and tried to take care of the problem. The governor had already escaped town,” it wrote.

Instead of helping the people whose lives have been devastated by this disaster, the government is busy trying to close the gaps that may endanger their very existence, like the local councils. It has been reported that government officials prevented locals from helping others because they feared the local councils.