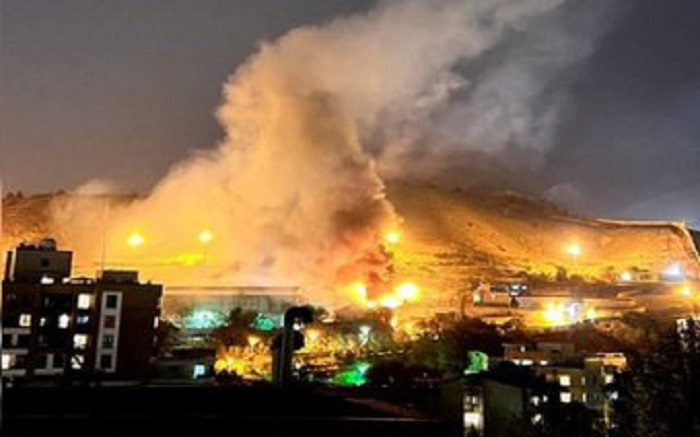 Citizens in northern Tehran reported a fire in the Evin Prison at 8:10 p.m. local time on October 15. The slogans “Death to Khamenei” and “Death to the dictator” could be heard in the area at the same time. Following the event, hundreds of citizens marched to the prison, with social media videos showing heavy traffic on the Yadegar expressway. Authorities dispatched dozens of anti-riot forces in response to the prison unrest.  Despite the repressive measures, dozens of citizens were able to get close to the prison.

Following reports of a fire at the prison, the judiciary’s Mizan outlet announced that eight inmates accused of theft died as a result of smoke inhalation. The publication also stated that 61 inmates are in coherent situations. Authorities believe the fire started in an entrepreneur-sewing workshop.

“We witnessed the blaze inside the prison from 8:00 pm; the sound of gunfire did not stop,” they said. The prison’s alarm had gone off several times since the morning. Several sources claim that prisoners have started a riot inside Evin. Firefighters arrived late but did nothing.”

The National Council of Resistance of Iran (NCRI) stated on October 18 that “while the regime is attempting to cover up the major atrocity it committed in Evin prison and does not even allow its Majles deputies to visit the prison, the scale of the crime comes to light after 48 hours.”

The following are additional details about the tragedy, based on reports and statements by eyewitnesses willing to testify before international courts and authorities:

Watch and judge what the #Iranian regime's brutal crackdown at Evin Prison tells about #IranRevoIution2022 as well as #Khamenei's state of mind pic.twitter.com/mqsSXeX6Rq

The Iranian opposition group revealed that a rebellion inside Iran’s most controlled center of torture, execution, and suffocation, which was completely linked with the nationwide protests, is another indication of the progress and expansion of the popular uprising. Fear and terror are being overcome by Iranians across the country.